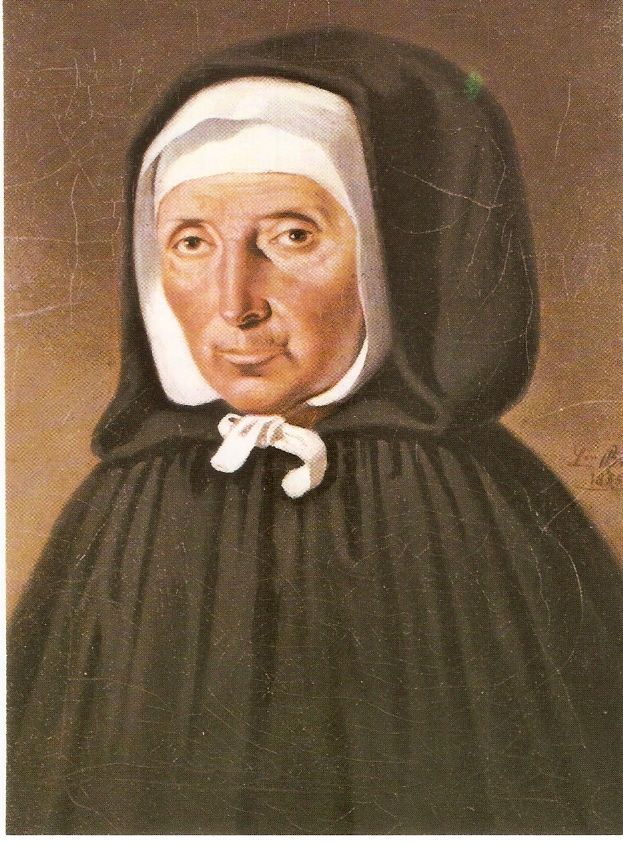 Biography of Juana Jugan, a French religious, founder of the congregation of the “Little Sisters of the Poor”. She was a humble young woman, poor in goods but rich in faith and generosity.

Everything in Juana Jugan’s life denotes her immense generosity and remarkable vitality at the service of the poor and abandoned elderly.

Childhood and family of Juana Jugan

Juana Jugan was born on October 25, 1792 in the French village of Petites-Croix, a small fishing port, of Cancale, located on the north coast of Brittany, in France.

Juana’s father, Joseph Jugan, was a fishing sailor, like most of Cancale’s men.

Her mother, Marie Horel, carried out various jobs in the village, to support her family while awaiting the return of her husband who worked fishing on the high seas.

Juana Jugan was the sixth of eight siblings, three of whom died shortly after birth.

Her father disappeared on a fishing trip to Newfoundland, when she was not yet four years old. Her mother was left alone to support and educate the five children who still lived.

Little Juana quickly learned to do some housework and take care of the animals on the high cliffs overlooking Cancale Bay.

Juana Jugan lived her childhood in the environment of the French Revolution (1789-1799). Like many other churches, the one in Cancale had been closed down by the revolutionaries. But many children received Christian instruction in secret from godly people.

As a result of the political climate and economic difficulties, Juana was unable to go to school. She learned to read and write thanks to religious women who taught her the catechism.

She was even able to make her First Communion in 1801.

At the age of 16, Jeanne Jugan was hired as a maid and kitchen helper in Saint-Coulomb, five kilometers from Cancale, in a manor house owned by the Viscountess de Choue, for whom she worked for several years.

In addition, Juana Jugan was responsible for welcoming the beggars who came to the viscountess’s house for help. She was also to visit, with the viscountess or on her behalf, those poor old men of the village who lived alone.

Being poor herself, she sensed the humiliation felt by the poor they helped. The viscountess taught Juana the importance of practicing her faith by showing love for her neighbor.

In 1816, when Juana Jugan was 24 years old, a young sailor from Cancale, who had already tried a few years before, asked her again. Her mother encouraged her to accept, but Juana rejected him because she sensed that her life would have another destiny.

Juana Jugan worked as a nurse in a hospital

After her experiences with the Viscountess de Choue, Jeanne Jugan decided to leave Cancale and her family to serve Jesus among the poor.

To do this, from 1817 she worked for six years as an auxiliary, and also as a nurse at the Rosais Hospital, in Saint-Servan, a town on the Breton coast.

Her work not only focused on the care of the hospitalized but also began to visit the poor neighborhoods of the city.

In those years, Juana Jugan joined the Third Order of the religious congregation of San Juan Eudes, founded in the seventeenth century; she discovered the experience of a life at once active and contemplative, centered on the love of Jesus.

(Tertiary order or third order, is a type of association of lay people who, living in their private homes, participate in the spirit of a religious order and seek Christian perfection under the direction of that order: Carmelites, Franciscans, Dominicans, and others) .

But, the demands of the job had exhausted her, she fell seriously ill and was forced to leave Rosais Hospital.

When Juana Jugan left the hospital in 1823 she was 31 years old; one of her tertiary friends, Miss Lecoq, welcomed her into her home.

For twelve years, the two women led a life in common conditioned by prayer, daily Mass, visiting the poor and catechesis to children.

At that time, Juana Jugan joined the Third Order of the Daughters of the Sacred Heart.

The origin of the Little Sisters of the Poor

When Mademoiselle Lecoq died in 1835, Juana Jugan met Frances Aubert. Both shared the same ideal of life, that of helping the most destitute.

In order to dedicate themselves fully to the care of the poor, they decided to rent a house in Saint-Servan. They were soon joined by a seventeen-year-old girl: Virginia Trénadiel.

On a winter day in 1839, Juana found a blind and paralyzed old woman, who had been abandoned; her name was Anne Chauvin.

Juana told her partner, Francisca Aubert, and said “Francisca, what do you think if we bring her home? For the expenses, I will work more ”. Francisca replied: “As you wish, Juana.”

Juana Jugan took Anne Chauvin home and laid her on her own bed. This spontaneous gesture committed her forever, as this old woman was followed by many more.

Poor herself, and forced to work hard to live, Juana Jugan was sensitive to the misery of the elderly she encountered on the streets. She did not hesitate to share her salary, bread and time with them.

Little by little, along with the beggars, the first aid arrived. Among these grants, the best was that of three young women who joined Juana Jugan in assisting the needy.

Francisca Aubert agreed to help with the cures and patches, but considered herself too old to be more involved.

In this way, around the two older women, a small cell has just been born, (María Jamet, Magdalena Bourges and Virginia Trénadiel) the embryo of a large congregation that will be called “Little Sisters of the Poor”.

Foundation of a new religious congregation

In May 1842, Juana Jugan was already 50 years old and presided over a small association of women who dedicated their lives to helping the poor.

These active, dynamic and generous women led by Juana Jugan and inspired by her Christian faith, decided to organize as a religious congregation.

Since their lives and jobs were very much in line with what the “Brothers of Saint John of God” were and did, they agreed to abide by similar regulations.

Juana Jugan was elected superior in the presence of Abbot Auguste Le Pailleur, vicar of Saint-Servan, who helped them organize the congregation. They adopted the name of “Servants of the Poor.”

The apartment where they lived and took in the homeless had already become too small. Therefore, they obtained authorization to move to an abandoned convent, which became a home for the poor.

But the generosity of the friends and the income of the sisters, on whose work the house lives, are no longer sufficient to care for the many destitute elderly who request to be accommodated.

A religious from San Juan de Dios suggests that Juana Jugan go out and beg. Juana’s proud Breton nature rebels against that need, but in the end she made up her mind to do so.

On her rounds, Juana Jugan asked for money, but also gifts in kind, such as vegetables, used sheets, wool, a cauldron, whatever.

Juana Jugan had an aversion to idleness. She got some spinning wheels, spinners and winders so that the less handicapped inmates could contribute some money to the community purse with their work.

At the end of 1843, the sisters were in charge of about forty people, men and women.

Juana Jugan was already 51 years old and Father Le Pailleur chose to appoint the young Maria Jamet, who was only 23 years old, as superior. Juana Jugan dedicated herself from then to begging for alms with which to serve the poor.

The congregation was renamed “Sisters of the Poor” and the sisters made vows of obedience, poverty and chastity. They began to wear an outfit inspired by the clothing of Breton women.

In 1849 they adopted the definitive name of “Little Sisters of the Poor”.

Like the “Brothers of Saint John of God”, they committed themselves more firmly to their Christian mission with a fourth vow: that of hospitality.

Juana Jugan is sent to ask for alms

For Juana Jugan, being removed from her post as superior and becoming practically a simple beggar was a great act of virtue, because as a woman of French Brittany she was by nature rather independent and authoritarian.

The request for alms begging from door to door, made by the “sisters” was always to meet the needs of that day. They had to go out, despite the weather, suffer the heat, the cold or the rain, approach all kinds of people, travel long distances and carry heavy loads.

The increase in people welcomed, forced to extend the collections further. Juana was sent to Rennes. From the first days, she noticed beggars, especially the older ones, who urgently needed help.

Without a doubt, a shelter had to be founded in that city. On March 25, 1846, the Sisters of the Poor acquired a house in Rennes.

Juana Jugan continued with her requests for alms to other cities in western France. Houses were opened in Dinan, Tours, Paris, Besançon, Nantes and Angers.

It was always Juana Jugan’s wish that older people really feel at home, in shelters.

It was also Juana’s desire to bring joy to her poor. One day, she went to the colonel of the Angers garrison and asked her to send some musicians from the regiment to cheer her elders on the afternoon of a public holiday. The colonel sent the entire gang to her to please her.

Last 27 years in the life of Juana Jugan

After having served collecting alms, from 1852 Juana Jugan was sent to the mother house of the congregation. She no longer maintained regular relations with benefactors, nor prominent functions among the sisters.

She still lived for twenty-seven years, hidden from the eyes of men, busy with humble domestic tasks and lavishing spiritual advice on the novices.

But, before dying, she had one last joy. On March 1, 1879, Pope Leo XIII definitively approved the constitutions of the “Little Sisters of the Poor”.

Juana Jugan passed away on August 28, 1879. At that time, the congregation numbered approximately 2,400 sisters and 177 foster homes.

Currently, 3,460 Little Sisters give life to 221 houses, spread over the 5 continents. Due to a wonderful circumstance, they continue to live mainly on the gifts and alms they receive.

The tomb of Joan Jugan is in the crypt of the chapel of the Mother House in Saint-Pern, in Brittany.

Juana Jugan was canonized by Benedict XVI on October 11, 2009.

In 1845, the French Academy awarded Juana the Montyon Prize for her work, a fact that served to publicize her work in neighboring cities.

Currently, the Little Sisters of the Poor are established in 31 countries, where with the help of countless volunteers they welcome and bring joy to the elderly.

Little Sisters of the Poor

Little Sisters of the Poor