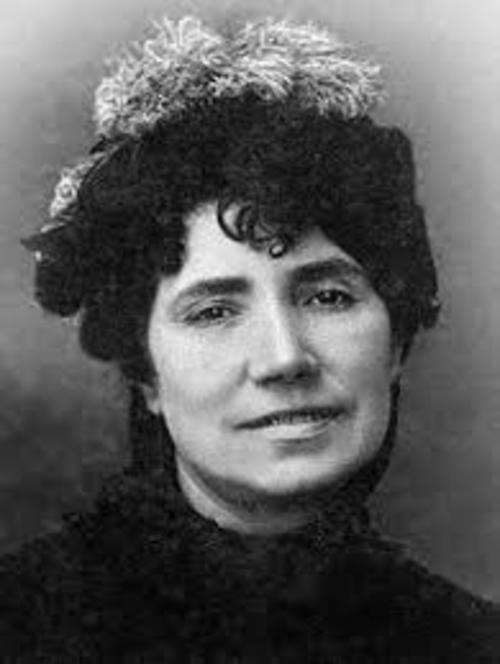 Biography of Rosalía de Castro, Spanish poet and novelist who wrote in both Galician and Spanish.

It is considered among the great poets of the Spanish literature of the 19th century, as an incarnation and symbol of the Galician people.

Rosalía de Castro is a great communicator of Galician

Her “Cantares gallegos” are classified as the first great work of contemporary Galician literature.

Therefore, Rosalía de Castro is qualified, along with Gustavo Adolfo Bécquer, as a precursor of modern Spanish poetry.

Writing in Galician in the 19th century, at the time she lived, was not easy at all, for a large number of reasons.

The Galician language was very discredited and despised; It was no longer remembered that it had been the vehicular language and the Galician-Portuguese lyrical creation.

The written tradition of Galician had been lost. It was necessary to start almost from scratch. There were few who considered this task, which was a cause of social loss of prestige for those who did it.

In this environment, Rosalía de Castro gave prestige to the Galician, by using it as a vehicle for her magnificent work “Cantares gallegos“.

The poetry of Rosalía de Castro

Rosalía excelled in the field of poetry. Three are the key works of her poetic creation:

Rosalía de Castro was born in Santiago de Compostela, on February 24, 1837. It was in a house located on the old entrance road to the city, for travelers from Pontevedra.

She was baptized a few hours after her birth, with the names of María Rosalía Rita. In the civil registry she appeared as the daughter of unknown parents.

However, she was spared entering an orphan home. This was due to the fact that María Martínez, her mother’s servant, took care of her as godmother of baptism.

Until she was eight years old, Rosalía was in the custody of her paternal aunt Teresa Martínez. She lived in the Castro de Ortoño village, belonging to the Coruña municipality of Ames.

In those first eight years, the future writer became aware of the harshness of the life of the Galician peasant.

The experiences of Rosalía de Castro in the Galician countryside

Also in those years she knew and lived the rural world of Galicia. She assimilated the language, the customs, the beliefs or the cantigas. All of this was later reflected in her work entitled “Cantares gallegos“.

Rosalía’s mother was able to take care of her and take her to Santiago de Compostela back in the year 1850.

But, previously she had already lived with her for some time, in Padrón. Rosalía learned basic notions of music and drawing. At that time it was the most appropriate instruction for a young lady.

In these years, the cultural life of Santiago revolved around the “Liceo de la Juventud“. Students and intellectuals such as Eduardo Pondal, Aurelio Aguirre and Manuel Murguía met there.

Rosalía regularly attended these activities. It is possible that during those years she had a romantic relationship with Aurelio Aguirre. What is certain is that Aguirre’s work left its mark on certain of Rosalía’s poems.

In April 1856, Rosalía moved to Madrid, to the home of her relative María García-Lugín y Castro. She lived there, on the ground floor of house number 13 on Ballesta Street.

A year after arriving in Madrid, Rosalía published a poetry brochure, written in Spanish and entitled “La Flor”.

Manuel Murguía published an appreciative review of this first collection of poems by Rosalía de Castro. The relationship between the two grew closer to the point that they married a little later, on October 10, 1858, in the church of San Ildefonso.

There is no doubt that Murguía was an important intellectual and social support for Rosalía. From the beginning, he encouraged her in her literary career.

He was responsible for the publication of “Cantares gallegos”, Rosalía’s first great poetic work. Nor did he spare her social support since the female condition was considered to be handicapped.

The Murguía Castro couple changed their address on multiple occasions, due to Murguía’s professional activities and job instability.

Changes of domicile of the Murguía Castro couple

In a very few years they went to live in Madrid, La Coruña, Madrid, Santiago and again Madrid.

Manuel Murguía was appointed director of the General Archive of Simancas, a position he held for two years.

From this moment on, Rosalía’s life developed between Madrid and Simancas; in this city she wrote a large part of the poetic compositions collected in “Follas novas”, her second great work.

In those years, the meeting between Rosalía de Castro and Gustavo Adolfo Bécquer took place.

As of 1871, Rosalía de Castro no longer left Galicia: she lived in the Torres de Lestrove, in Dodro (La Coruña), in Santiago de Compostela and in Padrón.

In 1875, she settled permanently in Padrón, a city where she had spent her childhood and a good part of her youth.

Rosalia never enjoyed good health; from a young age, she seemed doomed to an early death. In one of her books that she dedicated to her main physician, Professor Maximino Teijeiro, she wrote: “…. of her eternal sickness ”.

In 1883, at the age of 52, the uterine cancer that she had suffered from for some time became more complicated, and her health began to decline more and more.

She died on July 15, 1885, cared for until the last moment by her daughter Canberandra.

On May 15, 1891, her body was exhumed and solemnly taken to Santiago de Compostela; She was buried in the mausoleum created specifically for the writer, by the sculptor Jesús Landeira, in a chapel of the Santo Domingo Convent, in the Bonaval neighborhood.

Currently there are numerous monuments, public spaces and institutions that bear the name of Rosalía de Castro.

Not only in Spain, but in many other countries. Even an Iberia company plane and an aircraft belonging to Salvamento Marítimo have been baptized with the name of Rosalía de Castro.

Such is the acceptance and interest that the works of this writer arouse in the world, that in recent decades her poems have been translated into French, German, Russian and Japanese.

The true appreciation of Rosalía de Castro’s literary work came after her death, since throughout her life she was permanently despised and marginalized.

A bloody proof of this marginalization is that the distinguished writers, Leopoldo Alas and Armando Palacio Valdés, did not even mention her in their book “La Literatura en 1881“.

It was necessary to wait for the generation of 98 for the writers to recognize Rosalía as a creator related to her spirit.

They were the biggest promoters of Rosalía de Castro. Through their writings, they made her known throughout the Spanish geography and in Spanish-speaking America.

Azorín and Miguel de Unamuno, were the most determined supporters of Rosalía. Juan Ramón Jiménez also dedicated all kinds of compliments to her, gave her the qualification of innovator and precursor of Spanish modernism.

Here is a short list of her main literary works.

In addition, through the topics dealt with in Galician Songs, Rosalía gave her work a socio-political character, which reflected the harsh and appalling conditions under which Galician rural society found itself.

At the same time, she vindicated the Galician against Castilian, and Galicia against the rest of Spain.

Rosalía tried to defend and rediscover the Galician culture and identity, which had been obviated by the state centralist ideology.

By seeing themselves reflected in Rosalía’s work, the Galician people became aware of their own dignity.

The success of the book was due to the extraordinary connection that existed between the writer and the people of her region, reaching the extreme that the people came to assume a large number of her poems as community verses.

“The knight in the blue boots” It is an assortment of stories, published in 1867. It is a work considered by critics as the most interesting of Rosalía’s novels.

It is an enigmatic satirical fantasy, in which the Galician writer exposes several stories of a lyrical-fantastic nature, with traditional traits, which aims to satirize both the hypocrisy and the ignorance of Madrid society.

“You fuck novas“. In 1880, Rosalía de Castro published in the Spanish capital what was her second and last book of verses in the Galician language.

Qualified as Rosalía’s richest and most profound work, it is still considered by a good part of the critics as the transitional book between the collective poetry of “Galician Songs” and the radical intimacy of “On the banks of the Sar“.

It is characterized by being a work that has as its background a notable social intention, which is manifested in the complaint that the author makes of the marginalization of the female sex, orphaned children and peasants, especially those who had been seen in the Obligation to emigrate in the face of the country’s dire economic expectations.

Rosalía created a new and extremely personal universe, in which pure intimate lyricism reaches the highest level of artistic realization, beyond aesthetic experiences, in a continuous and anguished question about the meaning of human existence.

The poetry that is collected in this work reveals the conflict of a world in which there are no eternal values ​​and absolute truths, and where the human being is totally alone.

It is a pessimistic and anguished worldview, which reveals the crisis of values ​​of capitalist society in the face of the security of patriarchal society. Her poetic work offers a desolate vision of the world and of life.

It conveys a mysterious and ineffable feeling of loneliness, unrelated to anything in particular, and which is linked to the radical orphanhood of the human being.

Rosalía analyzes the person from her own experience; a process is perceived in which misfortune marks her life through suffering and pain.

The whole bleak vision of life is intensified by the existential anguish that grips her life.

“The first madman“. It is a short novel, written in Spanish and published in 1881.
Rosalía ignores the realistic fashion of the moment, to return to the romantic formulas of her most youthful stage.

“Palm Sunday“. It is an article that refers to floods in Padrón.
Written in Spanish, it was published in “La Ilustracion Gallega y Asturiana“, on February 28 and in March 1881.

“Galician customs“. It is an article written in Spanish in 1881. Rosalía criticizes the custom that existed on the coast, of offering a woman of the family to the newly arrived sailor. The writing was the object of very harsh criticism, within the Galician territory.

“On the banks of the Sar“. Rosalía de Castro published this book of poems in 1884, a year before her death.
She wrote it entirely in Spanish.

In 1963, on the occasion of the centenary of the publication of “Galician songs“, the figure of Rosalía was honored. Various events were organized that had the city of La Coruña as their main venue.

In other cities of Galicia, various tributes were promoted to honor its distinguished writer.

Its appearance gave universal prestige to the Galician language, as an instrument of literary creation.

This work by Rosalía de Castro represented a decisive event in the history of the cultural renaissance of Galicia.https://www.mujeresnotables.com/2018/11/26/biografia-de-francisca-aguirre-poetisa-espanola/

In this website of notable women, I have included two other extraordinary Spanish poets who have stood out worldwide. Francisca Aguirre , and Santa Teresa de Jesús (1525 – 1582).