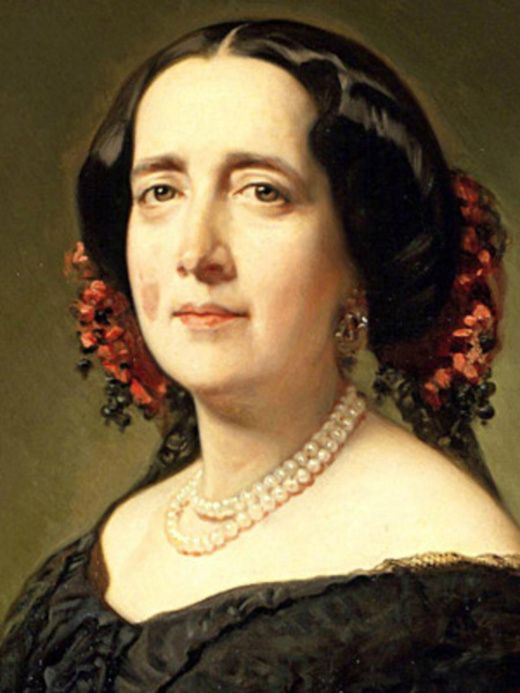 Biography of Gertrudis Gómez de Avellaneda, Spanish writer and poet of Romanticism. She is one of the key figures in Spanish-American romanticism and one of the forerunners of modern feminism.

Manuel Gómez, a Sevillian, commander of the Navy, had been stationed in Cuba since 1809. He had two children prior to his marriage to Doña Francisca.

Francisca de Arteaga belonged to an illustrious and wealthy Cuban family, whose ancestors came from the Basque country and the Canary Islands.

Gertrudis had two other siblings, but only she and her brother Manuel survived infancy.

Her childhood went smoothly until she was nine years old, in 1823. In that year her father died; and her mother married ten months later, with the Spanish soldier of Galician origin, D. Gaspar de Escalada y López de la Peña, with whom she had three children.

Education and youth of this great poet

Gertrudis Gómez received an excellent education, as she belonged to the highest social class in Cuba.

From an early age she was fond of reading novels, poetry and plays.

In 1830, she was just 15 years old when she rejected the marriage arranged by her maternal grandfather, with a wealthy distant relative.

The grandfather did not accept the refusal willingly. And Gertrudis was left without her grandfather’s inheritance.

Shortly after, for health reasons, she was sent to Santiago de Cuba.

Gertrudis moved to Spain in 1836

In 1836, her stepfather decided to sell all the properties in Cuba and settle in Spain. From Cuba they traveled to France, to Bordeaux.

During the two months of travel, Gertrudis composed one of her best known poems. It was the sonnet “At Departure“, an anthological composition, marked by existential tear.

Sea Pearl! Star of the West!
Beautiful Cuba! Your bright sky
the night covers with its opaque veil,
how pain covers my sad forehead.

I’m leaving!… The diligent mob,
to tear me from the native soil
the sails hoist, and ready to wake up
the breeze comes from your burning area.
Farewell, happy homeland, dear Eden!

Wherever fate in its fury impels me,
your sweet name will flatter my ear!
Goodbye! … The turgid candle is already creaking …
the anchor rises … the ship, shaken,
the waves short and silent flies.
Enviar comentarios

They stayed 18 days in Bordeaux, before going to settle in La Coruña.

Gertrudis was already 22 years old and found that the environment of Galician society was too “conservative” in her opinion.

Gertrudis Gómez lived for two years in La Coruña, the city where her stepfather’s relatives resided.

In those years, she wrote her first six poetic compositions and maintained a loving relationship with Mariano Ricafort, son of the captain general of Galicia.

The courtship broke down because the young Ricafort did not consider her appropriate for his girlfriend to dedicate herself to writing poetry.

On a trip to Andalusia accompanied by her brother Manuel, Gertrudis visited the main cities of the region.

She found in Andalusia an environment more in line with her way of understanding life.

So in 1839, Gertrudis Gómez de Avellaneda settled in Seville. It was for a short time, because very soon she moved to Cádiz.

The lively cultural environment of Cádiz stimulated Gertrudis’ creative activity and she decided to make her first literary works known.

There in Cádiz she met and befriended the journalist and literary critic, Manuel Cañete, who at that time was director and editor of the newspaper “La Aureola“.

Manuel gave Gertrudis the nickname “La Peregrina“; and, under that pseudonym, Gertrudis Gómez de Avellaneda published some poems in the local newspaper, and also in the newspaper “El Cisne” in Seville.

That year, 1839, Gertrudis met Ignacio Cepeda, a young law student, with whom she had a tormented love affair; never reciprocated, but which left an indelible mark on Gertrudis throughout her life.

The decade from the 1840s to 1849 was when Gertrudis Gómez displayed her magnificent literary qualities. At the same time, it was a time for her with heartbreaking romantic relationships.

In the summer of 1840 she premiered in Seville her first drama entitled “Leoncia”, which was well received due to its originality.

At the end of 1840 she went to Madrid, where she settled and made friends with writers of the time. She became exceptionally famous and praised with great admiration.

The following year, 1841, she published with great success in the capital of Spain, her first collection of verses entitled “Poetry”, which contained the sonnet “When departing” and a poem in verses of minor art, entitled “A la poesía“.

Her poetry has been compared to that of Elizabeth Barrett Browning for her analysis of the emotional states derived from the love experience.

Also in that year 1841 she published her first novel, which she entitled “Sab”. The novel dealt with the antislavery theme and that of unrequited love.

In 1842 she published the novel “Two Women“, in which she defended divorce as a solution to an unwanted union.

Her open feminism earned her furious criticism from various sectors of Madrid society.

In these years, Gertrudis consolidated her literary prestige. She participated in literary evenings and interacted with the great Spanish writers and intellectuals of the time. Many of them became her protectors and friends.

Her third novel was published in 1843 under the title “Espatolino”. In it she denounced the terrible situation in which the prison system was at that time.

Gertrudis Gómez’s plays occupied an important place on the Spanish scene in the period 1845-1855.

In 1844, her first play was premiered: “Alfonso Munio“. The plot is set in the court of Alfonso VII of León and Berenguela of Barcelona.

The triumph was tremendous and the fame of Gertrudis Gómez rose to unexpected levels.

In 1845 she obtained the first two prizes in a poetic contest organized by the “Liceo Artístico y Literario de Madrid”.

From then on, Gertrudis was among the most renowned writers in Spain. She became one of the most important women in the capital.

In the midst of this triumph, she fell madly in love with the poet Gabriel García Tassara.

He wanted to conquer her, but never wanted to marry her, as he considered her arrogant and too flirtatious.

Despite everything, Gertrude surrendered to her love, with disastrous consequences for her.

Got pregnant She was single and lived in Madrid in the mid-nineteenth century.

In her bitter loneliness and pessimism, seeing what was coming to her, she wrote “Adiós a la lira” (Good by to the lyre), which was a farewell to poetry. She was convinced that her end as a writer had come.

Her daughter María was born with terrible health conditions and without the doctors being able to give her hope of life. She died at seven months; this Garcia Tassara did not even want to listen to Gertrudis’ pleas for him to come and meet their daughter.

Gertrudis Gómez finally found the love of a husband

On May 10, 1846, Gertrudis married Don Pedro Sabater, the civil governor of Madrid, who was her first husband.

Don Pedro was a man with literary hobbies and a little younger than her. Pedro Sabater offered her his love and protection at a time when she most needed tenderness and understanding.

However, Pedro Sabater suffered from a serious illness. In search of a cure for their ailment, the newlyweds traveled to Paris.

Back in Madrid, when they were passing through Bordeaux, Pedro Sabater died in the arms of his wife, on August 1, 1846.

Gertrudis, completely desperate, secluded herself in a spiritual center belonging to the congregation of the “Holy Family of Bordeaux”.

As a tribute to her first husband, Don Pedro Savater, Gertrudis Gómez de Avellaneda composed two elegies that are among the highlights of her poetic work.

These elegies and the two poems entitled “To him” masterfully expressed her personal feelings in these sad circumstances.

But the indefatigable writer went on. Those years of emotional loneliness were for her years of great literary success. The amount of poetry, novels and plays published by Gertrudis is impressive.

In 1847, she published an Indianista novel, “Guatimocín”. The plot of the novel is set in the Mexico of the conquest stage. Gertrude demonstrated a lot of historical scholarship.

Two years later, in 1849, she made a valuable foray into the world of theater, with a play called “Saúl” (1849). It is a biblical drama, which represents rebellion.

Life of Gertrudis García Avellaneda from 1850

Between 1849 and 1853 she released seven dramatic works. Many of the main referents of that time considered Gertrudis Gómez one of the greatest Spanish-language poets.

In 1853, she applied for a seat in the Royal Spanish Academy.

But the illustrious Spanish academics of the mid-nineteenth century were not prepared for so much “innovation.” Even Marcelino Menéndez y Pelayo rejected Gertrudis’ candidacy, claiming that she was a “woman.”

Spain had to wait more than a century, until 1979, so that a woman, Carmen Conde, could occupy an armchair in the RAE, as an academic.

Gertrudis Gómez married again on April 26, 1856 with an influential politician, the colonel and deputy to the Cortes Domingo Verdugo y Massieu.

Among the vast work of Gertrudis Gómez, her novel “Baltasar” (1858) stands out, considered one of the masterpieces of romantic theater.

This dramatic work portrays vital weariness and melancholy, the evil of the century. These sentiments will be expressed again in the second half of the century, by the French symbolist poets and by the Hispanic modernists.

In 1858, as a result of the failure in the premiere of her comedy “The three loves” “Los tres amores” (someone threw a cat on stage), her husband blamed a certain Antonio Riber for the responsibility of the incident.

For this reason the two clashed in the street; and Antonio Riber seriously wounded Domingo Verdugo and Massieu.

The couple traveled to Cuba in 1859, hoping that the Caribbean climate would heal the colonel’s wounds.

In Cuba, after 23 years of absence, Gertrudis Gómez de Avellaneda was enthusiastically received and entertained by her compatriots. At a party at the Liceo de la Habana, she was proclaimed a national poet.

For six months, in 1860, she directed a magazine entitled “Cuban album of the good and the beautiful.”

She wrote a series of articles in which she raised the intellectual equality between women and men.

She even affirmed the intellectual superiority of women.

The displeasure that the members of the RAE had given her seven years before had not passed.

Last years in the life of Gertrudis Gómez

At the end of 1863 her husband died. The following year, Gertrudis traveled to New York, London, Paris and Seville.

Finally, after spending two years in Seville, she decided to settle permanently in Madrid.

At 50 she had had two lovers (Ignacio Cepeda and Gabriel García) and two husbands (Pedro Sabater and Domingo Verdugo).

In Madrid, she devoted herself almost exclusively to correcting her works and preparing the complete edition of them.

Gertrudis Gómez Avellaneda died at 58 years of age, on February 1, 1873, in Madrid. Her remains rest in the San Fernando cemetery in Seville along with those of Domingo Verdugo and her brother Manuel García Avellaneda.

When in 2009, the Cuban authorities requested the transfer to Cuba of the mortal remains of Gertrudis Gómez de Avellaneda, the rejection in Seville and the Canary Islands was emphatic and definitive.