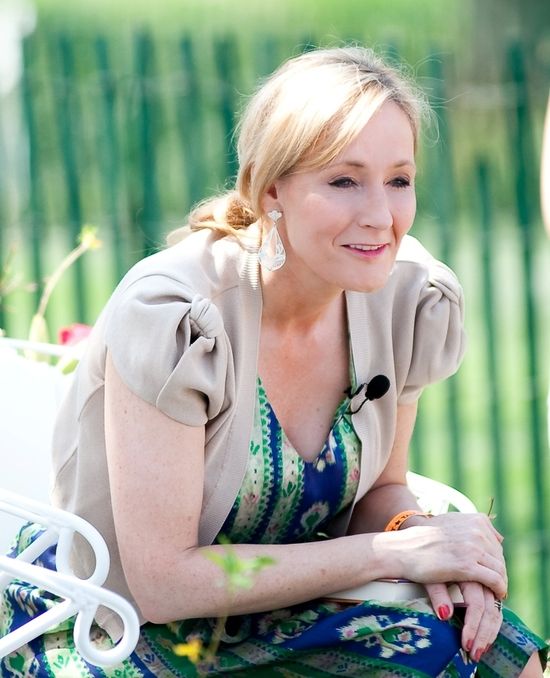 The first novel was followed by six others. The “Harry Potter” series has been one of the literary phenomena in history.

At the beginning of 1994, an unknown Joanne Rowling had been writing this fantastic novel, with an old typewriter.

She did it sitting at the table in an Edinburgh cafe, while taking care of her young daughter, Jessica.

The novel tells the adventures and adventures of Harry Potter, an orphan boy, with magical powers and capable of escaping at will to a fantasy world.

The first book was titled “Harry Potter and the Philosopher’s Stone.” The set of books sold by Joanne Rowling until the end of 2008, exceeds 500 million copies.

The Harry Potter novels were made into a movie, and have been huge at the box office.

Joanne Rowling was born in a small town, near Bristol, in the southwest of England.

Peter Rowling was an engineer for the Rolls-Royce company. Anne Volant was Scottish.

Joanne calls herself Jo, saying that when she was little no one called her Joanne, unless they were mad at her. They called her sister Di.

Due to her father’s work, the family soon moved to Winterbourne. This is a large town also close to Bristol.

Joanne’s first director at St. Michael, Alfred Dunn, is believed to have inspired the character of “Albus Dumbledore,” the powerful and kind-hearted wizard from the Harry Potter series.

When she was five or six years old, she made up the story of a bunny that had measles and was visited by her friends and by a giant bee.

Sean Harris, her best friend, owned a turquoise Ford Anglia. Joanne was inspired by that Ford, to describe a car that appears in one of her books.

Literary beginnings of the author of Harry Potter

In Winterbourne, another of Joanne and Dianne’s friends was named Ian Potter.

When Joanne started writing her first novel, she borrowed that last name to give life to her famous fictional character.

A few years later, the Rowlings moved to a rural area of ​​Gwent County called the Forest of Dean.

There in the field, the two sisters enjoyed the pleasure of playing in the field and walking near a river.

But, at the new school that Joanne and Dianne attended, one of the teachers became a subtle enemy of Joanne.

The hated professor Mrs. Morgan, went on to embody one of the most evil characters in the Harry Potter novels.

However, Joanne Rowling was a diligent student.

Possessing a prodigious imagination, she became famous for her love of telling stories to a small circle of friends, who listened carefully to her narration of long stories at recess times.

Studies and beginnings of her professional career

In 1982, Joanne Rowling failed to enroll at Oxford University.

Then, on the advice of her father, she studied French and classical philology at the University of Exeter.

After obtaining the double degree, she continued with a year of studies in Paris, in order to master French.

She then moved to London.

In the capital, she got a job as a bilingual researcher and secretary at Amnesty International.

As an Amnesty International official, she participated in investigative work on human rights violations in French-speaking Africa.

Beginning of her literary career

One day in June 1990, she had to travel by train from Manchester to London; On the way, the train had problems and the trip was delayed for 4 hours.

During that long wait, she came up with the idea of inventing “a school of witches and wizards.“

Suddenly, the idea of a boy who did not know he was a wizard came to her mind until he received an invitation to attend a magic school.

The plot began with Harry Potter, and then all the characters and situations came to the fore in her head.

As soon as Joanne entered her apartment, she began to write what she had been imagining while waiting on the train.

Unfortunately, in those months her mother passed away, as a result of multiple sclerosis that had affected her for 10 years.

Joanne Rowling was deeply saddened, dropped everything and went to teach English abroad.

It was 1990, and Joanne Rowling was 25 years old when she went to Portugal.

In Porto, Joanne Rowling fell in love with Jorge Arantes, a journalist from Portuguese television.

They were married in October 1992.

Soon after, they had a daughter who Joanne Rowling named Jessica, after Jessica Mitford.

Unfortunately, alcoholism and Jorge Arantes’s infidelities made Joanne Rowling leave him in November 1993.

The mother and daughter moved to Edinburgh, Scotland, to be close to Dianne Rowling, Joanne’s sister.

In August 1994, she formally filed for divorce, which was granted.

All these months were very hard for young Joanne Rowling. But her daughter Jessica gave her the strength not to bend.

She went to those places because taking her baby for a walk was the best way to put her to sleep.

It is interesting to remember another young Scottish mother who, a century earlier, under similar family circumstances, emigrated to the USA as a maid and ended up being one of the most outstanding astronomers at Harvard.

Her name was Williamina Fleming.

In 1995, Joanne Rowling finished her original for “Harry Potter and the Philosopher’s Stone” on her old typewriter.

She decided to go to the agency “Christopher Little Literary Agents” to represent her in the search for a publisher who would like to publish her novel.

This agency commissioned one of its readers (Bryony Evans) to do a first reading of the first three chapters of Joanne Rowling’s original.

In the face of the enthusiastic response from Bryony Evans, the agency “Christopher Little Literary Agents” agreed to represent Joanne Rowling in the search for a publisher.

Initially, they sent the book to twelve publishers, all of which rejected the manuscript.

A year later, in 1996, the president of a small British publishing house in London received a copy of the book.

The publisher’s name was Barry Cunningham and he ran the Bloomsbury Publishing House.

Seeing that the novel was a fantastic story, Barry Cunningham commissioned his eight-year-old daughter (Alicia Newton) to read the first chapter.

The girl devoured the writing and immediately asked her father for the second chapter.

This had a decisive influence on the fact that in 1997 the Bloomsbury Publishing House agreed to publish 1,000 copies of the book.

The novel for children was titled “Harry Potter and the Philosopher’s Stone.”

In the United States, this first novel by Joanne Rowling was published under the title “Harry Potter and the Sorcerer’s Stone.”

On November 16, 2001, the first film version of “Harry Potter and the Philosopher’s Stone” was released.

The continuation of the Harry Potter stories

Joanne Rowling had made a spectacular leap to world fame as a writer of children’s novels.

Barry Cunningham and the Bloomsbury Publishing House lacked time to plead with Joanne Rowling to allow the publication of her second novel.

The series has been translated into 74 languages, as the Harry Potter books sparked interest in reading among young people.

In drafting the contract, the production company Warner Bros (Warner Brothers Pictures) took into account the wishes and opinions of Joanne Rowling.

One of the main stipulations, was that the films had to be shot in Great Britain with a totally British cast.

Joanne Rowling was especially involved in the choice of the main characters.

The Coca-Cola company was the winner of the contest for providing products to the film series.

To do this, Joanne Rowling demanded that they donate 18 million dollars to the American foundation “Reading is Fundamental.“

The Harry Potter films were a worldwide success in their ten-year premiere of the different adaptations of each of the seven books.

After ending the Harry Potter series, Joanne Rowling continued to write children’s books. Among them:

Her overflowing imagination and her passion for the magical world of children has notably enriched fantasy literature.

She still writes under the pseudonym J. K. Rowling.

This pseudonym was because, before publishing the first novel, Bloomsbury Publishing House feared that readers would be reluctant to buy books written by a woman.

They asked her to use two initials and not her first name.

As a second initial, she chose the letter K in honor of her paternal grandmother Kathleen.

In April 2013, she published her second book for adults, “The song of the cuckoo”, in which she ventures into the black genre.

More than 20 years have passed since little Alice Newton had the unexpected privilege of being the first girl in the world to read the first two chapters of “Harry Potter and the Philosopher’s Stone.”

It can be said that this 8-year-old daughter of editor Barry Cunningham was essential to the beginning of Joanne Rowling’s meteoric career.

From being a complete stranger, struggling financially and living on a modest pension as an unemployed person, Joanne Rowling became a wealthy and popular woman.

In Europe and especially in the United States, crowds of children accompanied by their parents endured long lines in bookstores, to get hold of the latest adventures of the little magician.

Since then, Joanne Rowling is the first person to earn a billion US dollars from writing books.

She is currently the second richest female artist in the world.

In 2001, she bought a luxurious 19th century estate near the River Tay in Aberfeldy, Scotland.

She also owns a house in Edinburgh, and a £ 4.5 million mansion in Kensington, West London.

Jessica, the daughter she had with the Portuguese Arantes, has always lived with Joanne.

Little Jessica was a silent witness to the early Harry Potter novels.

In 2003, in Oviedo, the capital of Asturias, she became the first writer to receive the Prince of Asturias Award for Concord.

There is no doubt that her greatest reward has been the hundreds of thousands of children who have enjoyed reading the Harry Potter books and movies.