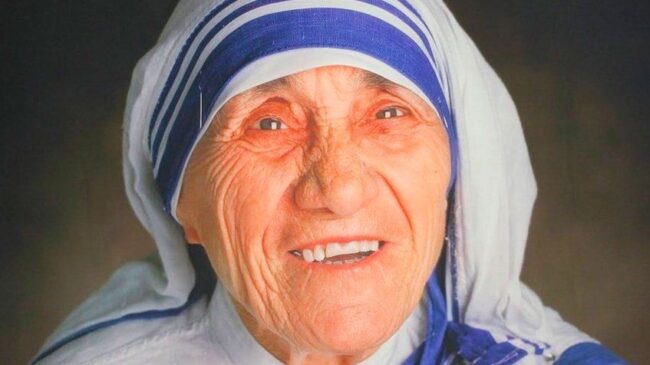 Biography of Teresa of Calcutta, one of the people who arouse the most admiration and respect.

If anyone has represented the message of Jesus of Nazareth in her life, it is “Mother Teresa of Calcutta”.

Why is Mother Teresa of Calcutta famous?

She did not dedicate herself to speaking “of the poor”, but to speaking “to them”. Her mission was not to “preach”, but to “give care, love and affection” to those who needed it most.

And in this she turned all her forces, with intelligence and determination, which were not few.

During her lifetime, Mother Teresa was named 18 times in Gallup polls of the most admired men and women of the year, being chosen in the category of the 10 women most appreciated by Americans worldwide.

The name Teresa acquired it when she became a nun in 1931.

Childhood and formation of Teresa of Calcutta

Her parents were wealthy Albanians living in Kosovo, who had emigrated to a town in the present Republic of Macedonia.

In her childhood, Agnes attended the town’s state school and her mother raised her in the Catholic religion.

She participated as a solo soprano in the choir of her parish.

At that time she began to be captivated by the stories of the Jesuit missionaries.

And she felt the desire to work like them in India.

In 1919, when Agnes was just 8 years old, her father died unexpectedly in the hospital.

He had been poisoned, possibly in retaliation for his political ideas.

Beginning of the religious life of Teresa of Calcutta

They went to the Abbey of Loreto. Agnes was admitted as a postulant, and destined for Calcutta.

From Calcutta she was sent in January 1929 to a town near the Himalayan mountains.

She began her novitiate and learned Bengali. She also gave classes at the school of Santa Teresa, which was near her convent.

Two years later, in 1931, she made the vows of poverty, chastity, and obedience as a nun.

She was immediately assigned to the School de Santa María, east of Calcutta.

Upon becoming a nun, they changed their name to Thérèse de Lisieux, the patron saint of missionaries.

However, Agnes chose to use the Castilianized term, Teresa.

In 1937, her superiors sent her to Ireland, as a history and geography teacher at the Loreto convent school.

Beginning of her missionary activity in Calcutta

The news from Calcutta of the famine, misery and death caused by poverty affected her deeply.

She felt that God was asking her to dedicate her life to the most disadvantaged in society and requested her transfer to that city.

Thus began a life of effective dedication and loving generosity towards the poorest, bringing joy and hope to thousands of people.

In 1948, she began working among the poor, teaching them to read.

Convinced that this was not enough and that she would have to contribute something more for God to help her, she asked for medical training in Paris and was able to receive training as a nurse with the “Medical Missionary Sisters of North America.

With this important complementary baggage, she settled in the poorest neighborhoods of Calcutta.

She opened a school and began serving the needs of the homeless and the hungry.

Her first year of working with the poor was fraught with difficulties.

She had no income, and was forced to ask for donations of food and supplies.

In 1948 she was granted permission to leave the convent and dedicate herself to helping those most in need.

She began to wear a white cotton sari, decorated with blue edges, replacing the traditional habit that she wore as a nun of the Loreto Congregation.

On October 7, 1950, the Holy See authorized her to inaugurate her new congregation, which they called “Missionaries of Charity.”

The mission of these new nuns was – in the words of their founder – “to care for the hungry, the naked, the homeless, the crippled, the blind, the lepers, all those people who feel useless, unloved, or unprotected by society, people who have become a burden to society and who are rejected by everyone ”.

The congregation had only thirteen members in Calcutta.

Distributed in orphanages, hospices and AIDS centers around the world.

The Missionaries of Charity offer charity and care to the blind, disabled, alcoholics, the elderly, the poor, the homeless and victims of any kind of calamity.

They are never asked about their nationality or their religious beliefs.

In 1952, Mother Teresa inaugurated the first “Home of the Dying” in Calcutta, a free hospice.

All those who arrived there received medical attention and was offered the opportunity to die with dignity, according to the rituals of their faith; Muslims read the Koran, Hindus received water from the Ganges, and Catholics obtained the last sacraments.

According to Teresa, “for people who lived worse than animals, a beautiful death is to die like angels, loved ones and dear ones.” Loved and beloved: Teresa’s secret.

To understand the courage and love of this extraordinary woman, nothing better than to quote her own words.

“The case of a woman lying in the middle of the street happened to me. The rats and ants were eating her.

I took her to the hospital, but they couldn’t do anything for her. They had to accept it, because I said that I would not leave there as long as they did not take care of her.

Then I went to the City Hall and asked that they give me a place to put such wretches.

Because on the same day, I had found others who were also dying in the middle of the street.

The administrator in charge of public health pointed to the temple of Kali, opening the “darmashalah” for me.

That was the place where once people rested after having worshiped the goddess.

The building was empty; That man asked me if I wanted it.

I was happy to have such a house because it was a center of worship and devotion for the Hindus.

In 24 hours we led our sick and disabled there.

Since then (and until the early 1970s) we have collected more than 20,000 people on the streets of Calcutta, about half of them having died there”.

This first hospital was followed by the “Home of the Child, of the Immaculate Heart” for orphans and homeless youth.

Soon after, she opened the “Shanti Nagar Center” for individuals suffering from leprosy.

And then other similar clinics where the Missionaries of Charity provided medical care, food and affection.

Teresa’s nuns spread to other countries

The Congregation of the Missionaries of Charity began to spread throughout the world in 1965.

At the time of Mother Teresa’s death, the Order numbered 5,000 nuns.

The nuns operated 610 missions in 123 countries (including several in the Soviet Union).

They served hospices and homes for people with AIDS, leprosy and tuberculosis, soup kitchens, counseling programs for children and families, orphanages and schools.

A new order, Missionaries of Charity

In response to the requests of many priests, in 1984 he founded the “Missionaries of Charity Fathers”.

In order to combine the activities of the Sisters with the resources of the ministerial priesthood.

In 2007, the order numbered approximately 450 Fathers.

Last years and death of Mother Teresa of Calcutta

On March 13, 1997, she resigned as Superior of the Missionaries of Charity.

She died in Calcutta on September 5, 1997 at the age of 87. It was due to cardiac arrest and respiratory problems.

On those same dates and also in India, Vicente and Anna Ferrer dedicated their lives and efforts to helping those most in need in that immense country. The Vicente Ferrer Foundation continues to do so with great efficiency.

So immense and extraordinary has been her work and that of her Missionaries of Charity, that the awards and honors came from governments, universities and leaders from around the world: India, the Philippines, USA, the Vatican, the United Kingdom, Australia, Albania , Italy, United Nations, Pakistan, Peru.

When she received the Nobel Prize, a journalist asked her “what can we do to promote world peace?”
She replied “Go home and love your family.”

In 2015, Pope Francis approved the canonization of Teresa of Calcutta.

The official act of canonization took place in St. Peter’s Square, on September 4, 2016.

Tens of thousands of people gathered for the ceremony; including 15 official government delegations and 1,500 homeless people from all over Italy.

The ceremony was televised live on the Vatican channel. Skopje.

In Mother Teresa’s hometown, a week-long celebration for her canonization was announced.

And in Calcutta, a special mass was celebrated at the Missionaries of Charity headquarters.