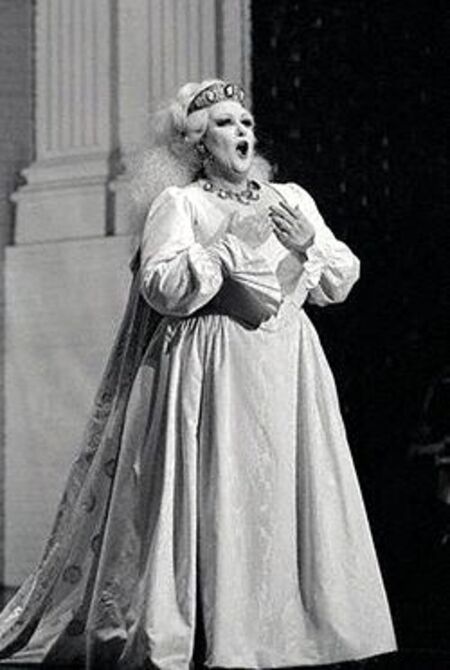 Biography of Montserrat Caballé, Spanish lyrical singer. She is considered one of the greatest sopranos of the 20th century.

Some merits of the soprano Montserrat Caballé

Her voice is notable for its purity, vocal technique, and power. She has played more than eighty operatic characters: Salomé, Violeta, la Marschallin, Semirami, Isolda, etc.

The great breadth of her repertoire is reflected in countless recordings. She also performs Spanish folk songs.

She was the Prince of Asturias Award for the Arts in 1991. She is an outstanding member of the Spanish Lyrical Generation represented by Plácido Domingo, José Carreras, Alfredo Kraus, Teresa Berganza, Victoria de los Ángeles, Ainhoa Arteta and Pilar Lorengar.

At the award ceremony, the Jury said of her that “with her immense musical talent … … she has universally projected the name of Spain and fostered a growing love for music in society as a whole”.

Childhood and family of the soprano Montserrat Caballé

She was the daughter of Carlos Caballé Borrás and Ana Folch, a family of humble origin who lived through the Spanish post-war period with great economic difficulties.

A short time later, her brother Carlos was born.

Her mother, born in Valencia, taught her the basic concepts of music theory.

In 1944, a wealthy Barcelona family, the Bertrand i Mata, made it easy for her to be admitted with a scholarship to the Conservatorio Superior de Música del Liceo de Barcelona.

In addition, this family gave her financial aid so that she could study more easily, without having to be a burden on her parents.

She attributed to them the development of her spectacular respiratory technique.

There is no doubt that also there she received training for the development of memory and the virtues necessary to carry out the enormous effort that supposed the so intense operatic activity that she had throughout her life.

Beginnings of her artistic activities

In 1950, after finishing her musical studies, she stepped on a stage for the first time, at the Teatro Fortuny, in Reus.

She played the title role of “La serva padrona” by Giovanni Battista Pergolesi.

In 1954, she won the gold medal for some of her performances.

In 1956, at the age of 23, she was admitted to the company of the Basel Municipal Theater.

There, on November 17, she made her operatic debut outside of Spain, performing Mimí in “La Bohème”.

She then played a large repertoire of roles, including “Tosca” by Giacomo Puccini, “Aida” by Giuseppe Verdi, and “Arabella” and “Salome” by Richard Strauss.

She was hired by the Bremen Opera for the 1960-1961 season, where she specialized in the roles of “bel canto”.

In 1962, she returned to her native Barcelona and debuted at the Lyceum, with “Arabella“, opera in three acts by Richard Strauss.

Start of her great international successes

However, her first great international success took place in 1965, when she had to replace Marilyn Horne, at Carnegie Hall in New York. Marilyn Horne felt indisposed and could not sing in Gaetano Donizetti’s “Lucrecia Borgia“.

Montserrat Caballé’s brilliant performance caused a sensation and made her definitely famous in the world of opera.

After this great triumph, the performances continued incessantly throughout the world.

In that same year, she debuted at the famous Glyndebourne Festival, which since 1934 has been held at the “Metropolitan Opera House” (near London). She played the character of Margarita in Gounod’s “Fausto“.

On August 14, 1964, Montserrat Caballé married the tenor Bernabé Martí, in the Monastery of Santa María de Montserrat. In that year 1964, another great Spanish soprano, Ainhoa Arteta, was born.

They had two children: Bernabé and Montserrat Martí Caballé; The latter has also dedicated herself to opera, as a soprano, and has recorded several songs with her.

Performances of Monserrat Caballé in the 1970s

In 1972 Montserrat made her debut at La Scala in Milan with Bellini’s “Norma“.

Immediately after, she was hired by the “Royal Opera House” in London and represented the character of Violeta, in Giuseppe Verdi’s “Traviata“.

In 1974, she successfully recorded a performance of the opera “Norma” at the Old Roman Theater in Orange (a city located in the South East of France).

Great performances followed in the 1980s

In 1980, she performed Rossini’s “Semiramide” at the Festival de Aix-en-Provence, directed by Jesús López Cobos.

In 1982, she received the Gold Medal of the Government of Catalonia; and in 1988, the National Music Prize of Spain.

In 1986, she played a small role in “Romanza final”, a biographical film about Julián Gayarre, directed by José María Forqué and starring José Carreras in the role of Gayarre.

Between 1986 and 1988, she performed the “Barcelona Album” with Queen vocalist Freddie Mercury, with whom she forged a great friendship.

Its main theme, “Barcelona“, was chosen by the Spanish Olympic Committee as the official anthem of the 1992 Barcelona Olympic Games.

This song “Barcelona” was performed live on two occasions: the first, in Ibiza on May 29, 1987; and the second, in October 1988, during the inauguration of the Barcelona Cultural Olympiad, at the macro festival “La Nit“, where they presented three songs live; “How Can I go On“, “The Golden Boy” and “Barcelona”.

They were unable to perform together at the opening ceremony of the 1992 Olympics, due to the passing of Freddie Mercury a year earlier.

In 1988, Caballé participated in the successful album “Purísimo Sara” by Sara Montiel, recording a duet with her the classic “La violetera“.

This album achieved great sales (Gold Record and then Platinum Record) and deserved an award in New York.

The list of awards and honors received are as numerous as they are justly deserved. Among them, it is worth highlighting, in chronological order:

Illness and death of Montserrat Caballé

On October 20, 2012, she suffered a mild stroke in Yekaterinburg during a tour of Russia.

They transferred her to the Hospital de la Santa Cruz y San Pablo, in Barcelona, ​​and she was discharged from the hospital eleven days later.

The brilliant triumphs obtained in the artistic life of this extraordinary woman are the result of her innate qualities, enhanced by the skillful initial education of her parents, the generous help of the Bertrand i Mata couple, the tenacity of Montserrat and the magnificent education received at the Barcelona Conservatory.

The great Montserrat Caballé died in Barcelona, ​​in the early hours of Saturday, October 6, 2018.