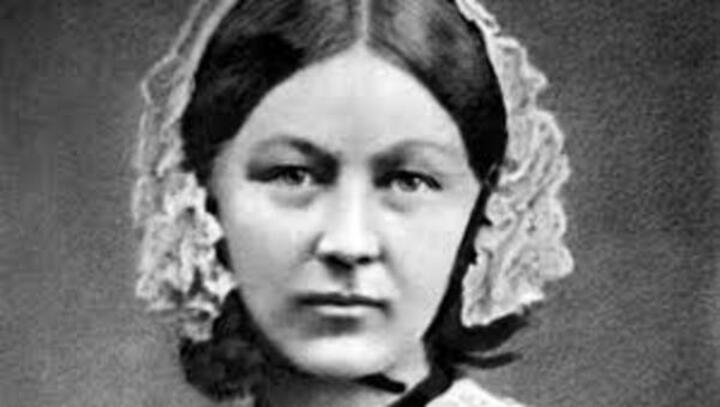 And there you can visit the “Florence Nightingale Museum”. There are other museums dedicated to her memory in the United Kingdom and in Turkey.

A bronze plaque, attached to the pedestal of the “Crimean War Memorial” in the Istanbul cemetery, bears the inscription: “To Florence Nightingale, whose work near this cemetery a century ago brought relief to human suffering and laid the bases of nursing as a profession”.

Childhood and education of Florence Nightingale

Florence Nightingale was born on May 20, 1820, in Florence, where her parents, belonging to an upper-class British family, were.

They baptized her with the name of Florence.

In this she was luckier than her older sister, who had been born when the family visited the city of Parthenopolis (near Naples) and the girl was named Parthenope.

Her father, William Nightingale, was an extremely wealthy landowner, whose family rubbed shoulders with the highest strata of English society.

Florence was fortunate that her father believed that women should also receive an education.

As it was not well regarded at that time for women to go to school and even less to university, he personally taught his daughters: Italian, Latin, Greek, philosophy, history, literature and mathematics.

At the early age of 17, with the strong opposition of her mother and sister, Florence communicated to the family her decision to dedicate herself to nursing, as soon as she acquired a minimum preparation.

Since then she had this in mind.

Her manifest intelligence and erudition won her the sympathies of important figures in politics, such as Richard Monckton Milnes, Benjamin Jowett and Sidney Herbert.

In this period of youth, Florence made trips through Greece and Egypt.

Her writings about Egypt are testimony to her learning process, and to her literary skills.

In 1850, she visited the Kaiserswerth Lutheran religious community in Germany. In this institution, she observed how Pastor Theodor Fliedner and his assistants worked caring for the marginalized sick.

She took the opportunity to receive medical training for 4 months.

Her father provided her with an annual income of £ 500.

This was more than enough for her to lead a comfortable life and continue her training.

In 1853, she assumed the position of superintendent at the “London Institute for the Care of Sick Ladies”.

In that same year the Crimean War broke out, a conflict of the Russian Empire against Turkey, France, the United Kingdom and the Kingdom of Sardinia.

The battles were mainly fought on the Crimean peninsula, around the Sevastopol naval base.

The war ended with the defeat of Russia in 1856.

The news reaching the London about the terrible conditions of the wounded was terrible.

Florence Nightingale decided to ask her friend Sidney Herbert, then Secretary of War, to make possible her transfer to the conflict zone, along with a group of nurses trained by herself.

On October 21, 1854, Florence and a team of 38 volunteer nurses left for the Ottoman Empire.

There they found that the wounded soldiers were receiving totally inadequate treatments from the overloaded medical team.

Medical supplies were scarce, hygiene was poor and infections were very frequent.

Some statistics showed that ten times more soldiers died from typhus, typhoid, cholera and dysentery than from wounds on the battlefield.

Conditions in the barracks hospital were harmful to patients. This was due to overcrowding, poor sanitary drains and lack of ventilation.

Cleaning of polluting landfills and improvement of ventilation were ordered.

From these measures, the mortality rate fell rapidly.

Some survivors of these hospitals recalled how, at night, the graceful figure of Florence glided silently down the corridors.

When all the medical officers had retired, she was making her nightly rounds with a small lamp in her hand.

On her return to London, she began to gather evidence to support her view that the soldiers were dying of the deplorable living conditions in the hospital.

This experience decisively influenced her later career, leading her to advocate the importance of improving hospital health conditions.

Her efforts helped reduce deaths in the military, and promote the proper sanitary design of hospitals.

She was not a rich girl who was content to criticize, be outraged, and launch incendiary soflamas to attract easy popularity.

She was too executive and practical, not to notice that talking and screaming didn’t fix anything.

To do something useful, she needed a lot of money and the support of the authorities and those who had money and power.

She substantiated her requests with statistics

At those times, the mathematical training her father gave her revealed its usefulness.

She needed numbers and figures to go along with her words.

But the figures alone are cold and difficult to understand.

It occurred to her that graphics were the ideal instrument for communicating what she knew.

She pioneered the use of visual representations of information and statistical graphs.

In fact, she was a pioneer in the graphical representation of statistical data.

She is credited with developing a form of a pie chart today known as the polar area diagram, or the Nightingale rose diagram, equivalent to a modern circular histogram.

She also used these charts, before civil officials and before the powerful.

With them, she demonstrated to all the magnitude of the health disaster in the army during the Crimean War.

In 1859, Nightingale was chosen as the first female member of the “Royal Statistical Society“.

Later she was chosen as an honorary member of the “American Statistical Association“.

Shortly before, another British woman, Ada Lovelace, had distinguished herself for her contributions to mathematics.

Florence Nightingales made valuable contributions to her country

Florence Nightingale was well known for her contributions in the fields of Nursing and Statistics.

Her work is also an important link in the defense of feminism in England.

In 1855, while she was still in Crimea, a public assembly was held for the purpose of raising funds to honor her.

The success of the call was such that it was decided to create the “Nightingale Fund” for the training of nurses.

Sidney Herbert was honorary secretary of the Foundation and the Duke of Cambridge, first president.

Thanks to this £ 45,000 fund, Florence was able to open the “Nightingale Training School” at Saint Thomas Hospital.

The first nurses trained in this School began working on May 16, 1865, in the “Liverpool Infirmary“.

The design of the building was strongly influenced by Nightingale’s ideas.

It was the first civil hospital that incorporated in its designs: the ventilation system, the spaciousness of the stairs and the arrangement of the cabinets.

In that same year 1859, her “Notes on Nursing: What is and what is not Nursing” were published.

This little book served as the foundation for the curriculum of the Nightingale School and other schools of nursing.

In it, she attached importance to hygiene, in order to stay healthy, preventing illness, or recovering from it.

The book was the first of its kind. It appeared at a time when the most basic health standards were just beginning to be known.

Hospitals were plagued with infections and nurses were still regarded as ignorant people with no professional education.

This book made Florence Nightingale recognized as the founder of modern nursing.

In addition to Notes on Nursing, she published other books in the form of “Notes” dealing with the correlation between sanitary techniques and medical facilities; and “Notes” on issues affecting Health, Efficiency and Hospital Administration of the British Army.

Another of her greatest achievements was the introduction of trained nurses to care for the sick at home in England and Ireland.

This innovation is considered the antecedent of the British National Health Service, established forty years after her death.

Her influence as a nurse came to the USA

In the 1870s, she sponsored Linda Richards, known as America’s First Trained Nurse.

In London, Linda Richards was trained to return to the United States with the appropriate knowledge and training to establish high-quality nursing schools in the USA.

Linda Richards became a great pioneer of nursing in the United States; and later in Japan.

In her later years, Florence Nightingale produced a comprehensive statistical report on health conditions in rural India, and led the introduction of improvements in medical care and the public health service in that country.

She successfully lobbied for the establishment of a Royal Commission to deal with the Indian health situation.

This was to improve the sanitary conditions of the soldiers in that country.

In 1870, she had a decisive influence on the creation of the British Red Cross.

Furthermore, she was an active member of the “Ladies Committee” of this institution. Florence Nightingale was interested in the activities of the Committee, until her death.

Henri Dunant, founder of the Red Cross, stated on a visit to London in 1872 that it was Florence Nightingale’s work in the Crimea that inspired him to travel to Italy during the war of 1859.

On August 13, 1910, at age 90, Florence Nightingale passed away while sleeping in her room in London.

Her relatives rejected the offer to bury her at Westminster Abbey.

She was buried in St. Margaret’s Church Cemetery, at the family grave, in East Wellow, Hampshire.

Several foundations bear her name. Among them the “Nightingale Research Foundation” of Canada, dedicated to the study and treatment of chronic fatigue syndrome.

Nightingale is suspected of having this syndrome.

In 1912, the “International Committee of the Red Cross” instituted the “Florence Nightingale Medal”.

This recognition is given every two years to nurses or nursing assistants, for outstanding services.

She was undoubtedly a woman of extraordinary intelligence, extremely efficient and of boundless generosity.

Florence Nightingale was the predecessor of other admirable women who dedicated their lives in favor of peace, such as the Austrian aristocrat and writer Bertha von Suttner, the French surgeon Suzanne Nöel or the Polish nurse Irene Sendlerowa.