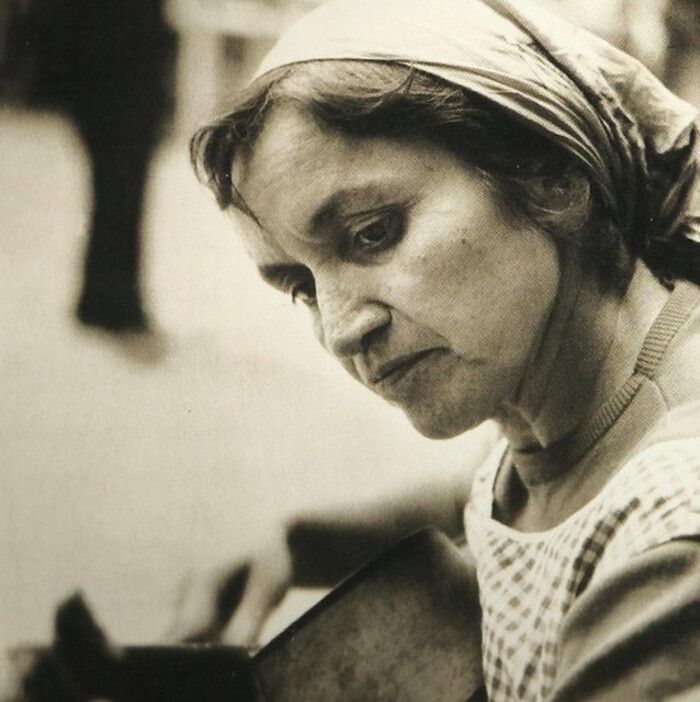 She was an effective popularizer of popular music in Chile. Her contribution to the Chilean artistic and musical work had great national diffusion and an enormous international artistic significance.

Her work inspired many singers and poets in Chile. With her example and genius she gave a strong impulse to the task of rescuing traditional music from the Chilean countryside.

She is the author of the famous song “Gracias a la vida”, which has been performed by numerous singers, but nobody has managed to reproduce that special touch that Violeta’s voice had.

Perhaps the Argentine singer, Mercedes Sosa, was the one who knew best how to interpret the deep feeling that this beautiful song exudes.

Thanks to life, which has given me so much
It gave me two stars, that when I open them
Perfect I distinguish black from white
And in the high sky its starry background
And in the crowds the man I love

Thanks to life, which has given me so much
She has heard me that in all its width
Record night and day, crickets and canaries
Hammers, turbines, barking, showers
And the tender voice of my beloved

Thanks to life, which has given me so much
It gave me the sound and the alphabet
With him the words that I think and declare
Mother, friend, brother, and light shining
The route of the soul that I’m loving

Thanks to life, which has given me so much
It has given me the walk of my tired feet
With them I walked cities and puddles
Beaches and deserts, mountains and plains
And your house, your street and your patio

Thanks to life, which has given me so much
Gave me the heart that shakes your frame
When I look deep into your clear eyes

Thanks to life, which has given me so much.

Violeta Parra was born on October 4, 1917, in the city of San Carlos, in the central zone of Chile.

In commemoration of her birthday, on October 4, the “Day of Chilean Music and Musicians” is celebrated in Chile.

Childhood of this remarkable woman singer and poet

Her childhood was spent mainly in the field. Between 1919 and 1921 the family resided in Santiago. later they went to the south of Chile, to the city of Lautaro.

In 1927, they moved to Chillán and lived there in the “Villa Alegre” neighborhood.

During the childhood years, Violeta continually suffered from various diseases, including a smallpox attack at age three.

She and her brothers had a lot of freedom to have fun in the waters of the neighboring Ñuble River and in the sawmills and barracks in the sector.

In those years the arrivals of circuses to the towns were relatively frequent.

Children admired and imitated the artists, acrobats, musicians, and clowns who brought joy and distraction to all the inhabitants.

When Violeta was 9 years old, she and some boys put on their own show as soon as the circus left.

Naturally, they charged tickets to the other children; Violeta played the guitar and sang a duet with one of her brothers.

The boys had to drop out of school and go on to earn some money.

Encouraged by Violeta, several brothers went out to sing in all the places where they were given permission to sing and act.

Her brother Nicanor, the oldest of the brothers, had gone to Santiago with a scholarship that had been awarded to him by the “League of Poor Students“.

Nicanor invited Violeta to live with him in Santiago, so that she could enroll in the Normal School for Girls and study to be a primary school teacher.

But, Violeta had already taken a liking to singing and was not interested at all in the studies of the Normal School.

So, shortly after starting, he left her and began singing in bars, playhouses and small neighborhood rooms along with his sister Hilda.

The two specialized in folk music and presented themselves as “The Parra Sisters“. They were quite successful and thus were able to earn a living in the capital.

Her mother, Doña Rosa Sandoval, was not willing to leave her girls alone. Therefore, in 1935 she moved to Santiago with the rest of her children.

All together they settled to live in the commune of Quinta Normal.

Beginnings of her artistic career

Two years later, in 1937, when she turned 20, Violeta began her artistic career regularly. She did it by performing at the restaurant “El Popular“, located on Avenida Matucana, 1080.

Before long, she also started singing at “El Tordo Azul“, a restaurant opposite “El Popular“.

Violeta formed a happy group with her brothers: Clara, Eduardo, Hilda and Roberto. The repertoire consisted of boleros, corridos, cuecas, rancheras and tonadas.

At that time she met the first great love of her life. It was Luis Cereceda Arenas, a railway engineer, whom she married.

They had two children: Isabel (Santiago, 1939) and Ángel (Valparaíso, 1943). Isabel and Angel adopted the surname Parra when they became outstanding musicians from the 1960s.

The Cereceda Parra couple lived in Llay-Llay, Valparaíso and Santiago. But Violeta’s character and artistic activities did not fit the conventional ideal of a wife. And the two separated in 1948.

In 1949, Violeta married Luis Arce; They had a daughter, Carmen Luisa.

Three years later, in 1952, Rosita Clara was born. Rosita passed away two years later, while Violeta was touring Europe and performing in Paris.

This sad death and the frequent absences of Violeta, ended up breaking the marriage harmony and Luis Arce asked her to separate.

Artistic activities in Chile and Europe

The decade from 1950 to 1959 were for Violeta years of intense activity, musical research, recordings and performances in Chile and Europe.

From this period are the songs and records recorded with the RCA Víctor label, some of which became especially popular:
“El Caleuche”, “La cueca del payaso”, “La viudita”.
“Black marriage”, “What a shame the soul feels”
“Singing and guitar”, “Accompanied by guitar”
”La tonada”, “La cueca”, “I sing to the difference”
“Verse by disappointment”, “Cueca largo de los Meneses”

The musical duo with her sister Hilda worked continuously until 1953.

Violeta Parra’s extensive work of compilation of Chilean musical traditions began in the neighborhoods of Santiago.

Then it spread throughout the country. Her magnificent work was reflected in more than 3,000 songs, gathered in the book “Cantos folclóricos chilenos“.

Violeta Parra could always count on the support and advice of her brother Nicanor.

He encouraged her to highlight the special beauty of traditional songs from the Chilean countryside.

In 1954, she kept the “Canta Violeta Parra” program on Radio Chilena, and won the “Caupolicán Prize” for Folklorist of the Year.

Subsequently, she received an invitation to perform at a Youth Festival in Warsaw. She took advantage of this trip to tour the Soviet Union and parts of Europe.

Her stay in Paris was especially gratifying for her, since there she recorded “Guitare et chant: chants et danses du Chili” and a series of songs, compiled from Chilean folklore.

The success obtained in Europe was unprecedented for any Chilean artist, and Violeta was filled with inspiration and creativity.

She returned to Chile in 1957, broke up with her husband Luis Arce and went with her children Carmen Luisa and Ángel to Concepción, hired by the University.

In Concepción she founded, the following year, the “National Museum of Folk Art“.

Violeta Parra began to show concern for social issues and became a brilliant builder of decimas and poetic compositions.

At the same time, she was an exceptional poetry musician. The records of this stage were recorded with the minimum accompaniment: only a wooden guitar.

Her inexhaustible energy and the innumerable ideas she had in mind led her to work on ceramics, oil paintings and burlap.

All this she had seen the peasants do during the tours she made looking for popular songs.

The results of her work encouraged her to present them in the first two editions of the “Chilean Fair of Plastic Arts” (1959 and 1960).

She also worked for a time at the “National Museum of Folk Art” that she had helped create at the University of Concepción.

Then she traveled through almost all of Chile, offering recitals and folklore courses.

Work trips around the world

In 1961, Violeta traveled to Argentina, but this time she wanted to reunite her children Angel and Isabel in Buenos Aires; They were also accompanied by “la Tita”, Isabel’s daughter born in 1956.

With all of them she later traveled to Finland where she participated in the “VIII World Festival of Youth and Students“.

Afterward, she toured the Soviet Union, Germany, Italy, and France.

She settled in Paris for a while, sang in the Latin Quarter and gave recitals at the Unesco Theater of Nations.

In radio and television performances she did it accompanied by her children Angel and Isabel.

This presence in France finally launched her sons Ángel and Isabel Parra into the recording world.

Violeta continued her recordings with the LP “Recordando a Chile (a Chilean in Paris)”.

In 1964, Violeta Parra was the first Latin American to exhibit individually at the Louvre Palace Decorative Arts Museum.

She presented a series of her burlap, oil paintings and wire sculptures, all made by her there in Paris.

Gilbert Favre was a Swiss anthropologist, born in 1936, a jazz lover and fond of clarinet and quena.

During his stay in Chile and Bolivia, he dedicated himself to exploring the culture and folklore of Latin America.

He was a founding member of the Bolivian group Los Jairas, where he played the quena.

In 1960, during his stay in Chile, Gilbert Favre met Violeta Parra and had an affair with her.

A short time later, Gilbert Favre returned to Geneva, to be close to Violeta Parra who had gone to France.

During the years that Favre lived with Violeta, she composed “Gracias a la vida” due to the intense love she felt for him. After living in Europe for a few years, Favre moved to Bolivia and abandoned Violeta.

This betrayal left her in a very vulnerable state of mind. She went to see him in Bolivia and found him married.

As a result of this, she composed “Run Run went north,” “Cursed Heart,” “What did I get out of loving you?” and several others dedicated to Favre.

In this Parisian era, her most belligerent songs against social inequality in Chile emerged: “Look how they smile”, “What will the Holy Father say?”, “Arauco has a penalty”, “According to the favor of the wind“.

These songs, recorded in France, were the basis of the musical current known as the New Chilean Song.

Violeta Parra’s return to her Chile

In June 1965, the Parras returned to Chile. At the end of that year, Violeta installed a large tent in La Reina, Comuna de Ñuñoa, with the aim of turning it into an important Chilean musical center.

Her children Ángel and Isabel, Rolando Alarcón, Víctor Jara and Patricio Manns, among others, participated. Unfortunately, the public response was not very motivating.

Violeta Parra left us all

On February 5, 1967, the Chileans had an immensely sad news. They were the first to know that a woman as extraordinary as Violeta Parra had committed suicide by shooting herself in the head when she was in her tent at La Reina.

She had lived 49 years, during which she enriched her country and the world with her wonderful songs.

The great Argentine folk singer, Mercedes Sosa, dedicated one of her musical albums to her in 1969, during her visit to Chile.

The burning chapel was erected in her Queen’s tent and her funeral was held two days later. She was buried in a niche in gallery 31 of the General Cemetery of Santiago de Chile.