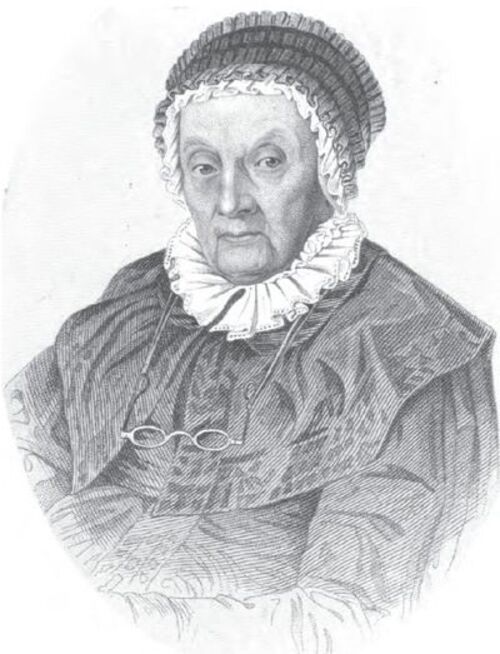 Biography of Caroline Herschel, extraordinary German astronomer; She died in 1848, at the age of 97, and for much of her life she was the silent assistant to her brother: William Herschel, the famous astronomer and telescope builder.

Childhood and family of Caroline Herschel

Caroline Herschel was born on March 16, 1750, in Hannover, Prussia.

Her father Isaac was a talented musician who set out to give her six male children training in different disciplines: music, mathematics, astronomy, languages.

The mother, Anna Ilse, was a woman of her time, and did not see the need for a “girl” to receive special education; she thought that it was enough for women to know how to read and write.

But her father secretly gave Caroline music lessons and taught her some astronomy.

When she was 10 years old, Caroline became ill, first from smallpox and later from typhus.

These diseases stopped her growth permanently.

Her parents realized that this physical handicap would prevent her from getting married, and they resigned themselves to the idea that she would be a spinster.

Unfortunately, her father passed away two years later, in 1762. Her mother took over Caroline’s education, but in the traditional way: in household chores and in the care of her brothers.

Happily, in 1772, when Caroline was 22, her brother William, who worked in Bath, England, asked her mother to have Caroline move in with him, as a housewife.

In daily contact with his sister, William saw that she had a magical combination of exceptional abilities for music and science. He taught her math, astronomy, and English.

Thanks to him, Caroline was also able to continue with her musical training and became a great soprano in Bath.

Caroline performed at the concerts her older brother offered, as an organist and conductor in the city; and was requested as a soloist by the city’s aristocracy.

However, Caroline’s musical career was not too long, as her brother’s growing fondness for astronomy led him to ask her to collaborate with him on this hobby.

William Herschel spent most of his free time building telescopes for himself and for those who commissioned him.

His reputation as a telescope builder reached such a point that he decided to quit his job as a musician and devote all his time to telescope building and astronomy.

Caroline Herschel began helping her brother as an apprentice; But, then she made the decision to abandon her musical career to become fully the assistant of her older brother.

Her job was to grind and polish mirrors, write down observations he dictated night after night, review them during the day, and do algebraic calculations to establish astronomical distances.

And that’s how she began to dedicate her life to the study of the universe.

Thus she changed her destiny as a housewife and became a remarkable astronomer.

She was the predecessor of other great women who a hundred years later dedicated themselves to astronomy: Cecilia Payne, Beatrice Tinsley, Silvia Torres, VeraRubin and many others.

In 1781, with his careful observations and mathematical calculations, William Herschel discovered a new planet, which was beyond Saturn.

He called it “Planet George” and it came to join the 5 planets already known since the time of Galileo: Mercury, Venus, Mars, Jupiter and Saturn.

King George III rewarded this extraordinary discovery, appointing him an astronomer at the Court of England, with a salary of £ 200 a year.

Caroline Herschel wrote on that date: “From that moment all the rooms in the house at 19 New King Street turned into a large workshop“.

In that house, today a Museum, the Herschel brothers continued to build their own telescopes.

The newly discovered planet continued to be called George until 1850, the date on which the name Uranus was assigned to it, to continue with the mythological genealogy.

William’s appointment as an astronomer for the Windsor Court forced him to be absent from the New King Street flat for long periods.

Caroline took advantage of that free time to make her own sightings.

In 1786, her brother gave her a small telescope for her personal use; Caroline Herschel developed a line of work parallel to the one she carried out with William and set up her own observatory.

Caroline’s wonderful years as an astronomer

They were Caroline’s most productive years because, freed from housework, she was able to devote herself fully to astronomy. She became a scientific celebrity.

She worked hard: at night, observing stars; During the day, she performed mathematical calculations and wrote scientific papers.

She also helped her brother build bigger and more powerful telescopes, which made it possible for them to observe and study stars farther than the Moon and planets.

Both brothers dedicated themselves to the study of the sky, to the design and construction of telescopes and to the cataloging of their observations.

Together, they discovered a thousand double stars, proving that many were binary star systems that revolved around each other.

This was the first physical proof of the action of the force of gravity outside the solar system.

In any case, thanks to a salary of 50 pounds a year that was assigned to her by King George III, as her brother’s assistant, she achieved some economic independence.

It is the beautiful story of a wonderful collaboration between two brothers: William Herschel, one of the greatest geniuses in astronomy, stimulated and helped by an intelligent and affectionate Caroline.

Caroline Herschel is known for being the first woman to discover a comet. She did it on August 1, 1786, between the constellations Ursa Major and Coma Berenice.

Because time and the comet were running fast, and her brother William was out of town on business, Caroline deemed it appropriate to immediately report her discovery to the Secretary of the Royal Society.

Back then it was unusual for a woman to do scientific work; and Caroline was nothing more than her brother’s assistant. So upon his return, it was William who had to corroborate the discovery.

Caroline Herschel was recognized as an astronomer

A little later, in 1787, Caroline went on to publish in the Royal Society’s scientific journal “Philosophical Transactions“; something unusual for the time.

She was the first woman to get a publication accepted at this important and select institution.

However, she had to wait almost 50 years, until 1835, to be recognized as an honorary member of the “Royal Astronomy Society“.

Acknowledgments for her great research work

In the period from 1786 to 1797, Caroline Herschel discovered three nebulae and eight comets. In the years that followed, she cataloged every discovery she and her brother had made. Two of the astronomical catalogs published by Caroline Herschel are in use today.

Almost a century later, another woman, the American Maria Mitchell, was the third woman to discover a comet.

On her 96th birthday, Caroline Herschel was awarded the King of Prussia’s Gold Medal for Science for her achievements during her lifetime.

Her hard work led her to complete, in 1798, the “Flamsteed 560 Fixed Star Observation Index“, which included 560 stars that the English astronomer John Flamsteed had not included in his catalog of more than 3,000 stars.

Caroline Herschel submitted the listing to the Royal Astronomical Society.

Subsequently, she managed to publish the “General Reference Index of each observation, of each star mentioned in the British Catalog“, also with the Royal Astronomical Society.

When her brother died on August 25, 1822, Caroline returned to Hannover, where she received numerous honors.

Among them, the Gold medal of the Royal Astronomical Society, in 1828, society of which she was named honorary member in 1835, at 85 years of age.

In some ways, Caroline Herschel bears similarities to the brilliant Hypatia of Alexandria.

Both received support and family instruction: Hypatia, from their father; Caroline, from her brother. Both dared to build instruments intended to investigate in the heavens.

An extraordinary woman, who supported and facilitated the development of the genius of her brother William Herschel.