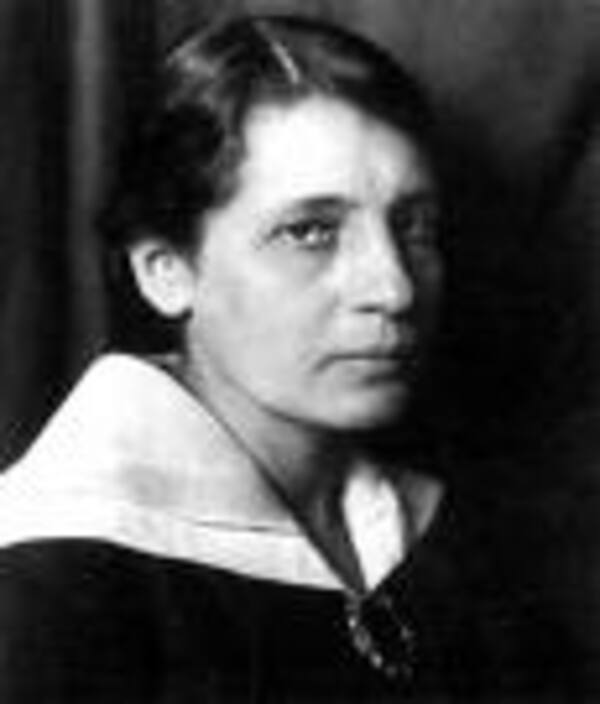 Biography of Lise Meitner, notable Austrian scientist one of the most important figures in modern physics.

She received five honorary doctorates and several decorations, such as:

All this was a fair recognition of this woman of extraordinary value and who made great contributions to the advancement of knowledge of the subject.

Lise Meitner fought all her life for the peaceful use of atomic energy.

Her father, Philipp Meitner, a Jew, with legal studies, practiced as a lawyer in Vienna.

Mr. Meitner was an educated and cultivated man who knew how to appreciate his daughter’s enormous intelligence.

In addition, he was courageous enough to escape the social pressure that forced women to corner at the time.

He was the one who most intellectually motivated his daughter and encouraged her to follow in his and her brothers’ footsteps.

Studies and training of the scientist Lise Meitner

Lise Meitner began her university studies in 1901, in Vienna.

She was lucky in two things:

As a man, Ludwig Boltzmann knew how to appreciate the immense unrecognized worth of women. Consequently, he knew how to transmit his passion for science.

Encouraged by Boltzmann and enjoying the atmosphere of improvement that was around her, Lise Meitner managed to obtain a PhD in Physics in 1906.

In those years of the beginning of the century, in the academic world there was a frenetic activity.

There was great motivation due to the euphoria of knowing that the basic components of matter were being discovered.

The works of some investigators were already known:

Lise Meitner had to go to Berlin to work

In spite of everything, in Austria the women were already beginning to study, but they did not receive authorization to practice a profession.

They were not allowed to work in anything other than housework.

Therefore, Lise Meitner decided to move to Berlin where there was more scope.

In Berlin, she asked the great Max Planck for permission to attend his classes. Planck immediately appreciated the sharp intelligence of that young woman and accepted her as a student.

There, Lise Meitner met the one who would become one of the brightest German physicists, Otto Hahn.

Otto Hahn and Lise Meitner befriended and worked together, until the wave of Nazi hatred of Jews separated them.

In 1902, Hahn and Lise did an experiment with uranium. Lise realized that the uranium nucleus (element 92) had been divided into two lighter barium nuclei (element 56).

However, they failed to find out the cause of this phenomenon. That was the first nuclear physics experiment in history.

When the result of this experiment was published, Lise Meitner was not mentioned. Because she was Jewish, in Germany she had no official authorization to publish.

Otto Hahn and Lise Meitner were a very productive couple.

Otto Hahn was the expert in chemistry and Lise Meitner, in addition to contributing her knowledge of physics, was dedicated to sample preparation and measurement and interpretation of results.

A few years later, in 1908, they both published three important articles, followed by another six in 1909.

Lise Meitner suffered discrimination for being a woman

However, in those early years of the 20th century, even in Berlin, not everything was a carpet of roses for women.

Lise was not allowed to enter the laboratory alone, nor to use the Institute’s toilet facilities.

Furthermore, she did not receive any financial compensation for her work.

Lise Meitner was able to survive and continue training thanks to her father’s help.

She rented a room without a bathroom, in a women’s residence.

It was not until 1913 that Max Planck was able to name her “first assistant” and assign her a modest salary.

In 1912, Albert Einstein had received an invitation to give a talk at that Institute and met Lisa Meitner, whom he affectionately called “our Marie Curie“.

When World War I began in 1914, Lise collaborated as an X-ray technician in one of the Berlin hospitals.

In 1917, she created the Meitner Laboratory and perfected Otto Hahn’s sample preparation technique.

In 1918, she submitted an article on the discovery of protoactin (item 91) in which Hahn appears as the principal investigator.

This mention of Otto Hahn was a generous token of Lise Meitner’s thanks, and a way to make up for the loss of years of research when he had to go to the war front.

In 1919, Lise Meitner was the first woman to obtain a University Professor position and was Max Planck’s assistant.

With him she worked on the measurement of gamma rays. Also in that year, the “German Chemistry Association” awarded Hahn with the Emil Fischer medal.

The court offered Lise Meitner a “copy” of the medal, but without explicit recognition of her merits.

Lise Meitner said nothing; she simply did not show up for the ceremony or go to pick up her “copy.”

After the First World War, the new discoveries in nuclear physics were multiplying rapidly.

In the early 1930s, the existence of protons, electrons, and “neutrons” was already known as constituents of the nucleus of any chemical element.

For her part, thanks to the development of new techniques, Lise Meitner detected for the first time a positron (the electron’s antiparticle, which has the same mass but positive charge) and made notable progress in the study of alpha, beta and gamma rays.

Lise Meitner was abused in Germany for being Jewish

In 1933, with Hitler’s coming to power, the persecution of the Jews began in Germany.

Lise was removed from her teaching title and her fellow Jewish scientists were fired from their jobs.

Max Planck and Werner Heisenberg and Otto Hahn were not comfortable with the situation; but they hoped that the Nazis would soon make up for the mistake of dispensing with such valuable scientists.

At the time, there were four major nuclear physics research groups in Europe.

In 1938, the political situation in Germany worsened and Lise Meitner lost her Austrian nationality.

The new head of the Investigative Council demanded Otto Hahn to expel Lise Meitner from her job, a request that he executed the same day.

For weeks Lise did not know what to do, she was without money; alone and scared, she was waiting for a university to offer her a job.

The German government took away her passport and prohibited her from traveling.

She received a job offer from her friend Niels Bohr in Copenhagen, but Max Planck convinced her not to leave Berlin, since her laboratory needed her, especially with the recent discovery of the neutron, which would allow the creation of elements heavier than the uranium.

Lise Meitner had to flee Germany

Her colleagues in Berlin did their best to help her out of the country.

Finally, in 1939 she managed to travel clandestinely on a train to Holland.

From there she went to Stockholm, Sweden, where one of her nephews offered him refuge.

But, in Stockholm, at the “Manne Siegbahn Institute“, far from finding hospitality, she met a professor who put all possible obstacles to her research.

She had the lowest salary in the institute, she was not allowed to have students (in fact, students were suggested not to talk to her); And, of course, they gave her very little resources to build a new experimental laboratory.

Despite everything, Lise Meitner resumed her investigations as best she could.

In 1939, Lise and her nephew Otto Frisch (a Copenhagen resident) were the first to publish the results of some experiments.

The two of them were the first to introduce the term “nuclear fission” (the breakdown of a heavy atom into others that are less heavy and more stable and the transformation of mass into energy, according to the law discovered by Einstein).

The article was published in the journal Nature and set off all alarms among German, English, Italian, Russian, and American scientists.

For his part, Otto Hahn was still in Berlin, successful in the same experiments, but had gone on to work for the German Army.

His relations with Lise Meitner were completely cooled by the unthinkable that a German could collaborate with a Jewess.

The discovery of nuclear fission

The discovery of nuclear fission paved the way for a practical release of nuclear energy in an extraordinary way.

Otto Hahn’s discovery served as the basis for the atomic bomb to be built later, a project in which Lise Meitner refused to participate, hoping that the project would prove impossible.

In 1942, she was offered to participate in an international investigation group to get an atomic bomb and end the Nazi regime.

This offer included an invitation to move to the United States and work with the best world scientists.

Lise Meitner rejected the offer and preferred to continue in that Swedish laboratory that did not want her. She made her reasons very clear: she wanted not to have to do with making a bomb.

In late 1944 Otto Hahn was awarded the Nobel Prize in Chemistry.

No one understood why, the two having been nominated together in 1939, it was now granted only to him.

The only explanation was that on the Nobel committee was the director of her Siegbahn laboratory, who once again tried to harm Lise, although it was never known whether it was due to professional jealousy or male chauvinistic prejudice.

It was a difficult time for Hahn to travel to Sweden and he requested that the award ceremony be postponed.

In 1945, the allies entered Berlin and arrested all members of the Uranus project of Nazi Germany.

They were transferred to a farm in Great Britain where the interrogators tried to find out where the development of the atomic bomb was in Germany.

To do this, they were held together in a house full of microphones. In their conversations Otto Hahn’s emphatic statement was recorded, that he was the sole inventor of fission and that he would have discovered it earlier if it had not been because Lise Meitner hindered her experiments: “Only when she left did I get carry out the experiment that produced the first fission”.

Lise Meitner was honored in America

In 1946, Lise Meitner traveled to the USA to see her family; there she was received with all the honors. Named “Woman of the Year“, she received the award from President Harry Truman.

Such popular enthusiasm was unleashed that a proposal came to her from Hollywood to shoot a movie. Lise Meitner did not accept the offer.

Lisa Meitner was aware that she could never return to Germany, because she felt unable to recognize the country that was once her home.

At the end of the war, her former colleagues did not try to talk to her or suggest that she return, despite knowing her precarious situation in Sweden.

In 1960, she settled permanently in England. Much later, in Germany she received honors, such as giving her name to a Nuclear Research Institute founded in 1959.

This page has a lot of data found in an article by Maia García (PhD in Physics and who works in San Sebastián, Spain).