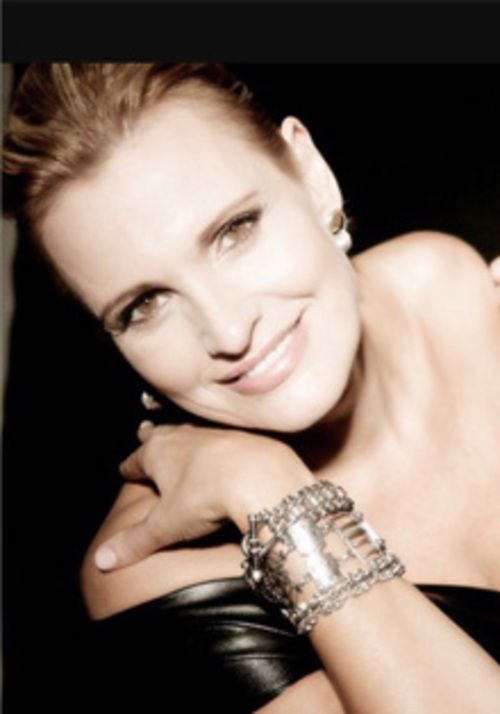 Biography of Ainhoa Arteta, a magnificent Spanish soprano who has developed an intense and triumphant lyrical career in the international arena.

Until recently, she was less known in Spain than abroad. She has always known how to combine her demanding singing career with the education and care of her two children: Iker (born in 2010) and Sarah (born before, in 2000).

Family and childhood of Ainhoa Arteta

Ainhoa Arteta Ibarrolaburu, was born on September 24, 1964, in Tolosa, Guipúzcoa.

Tolosa is a city located in the central part of the province of Guipúzcoa, in the Basque country. For a decade, from 1844 to 1854, it was the capital of the province. It currently has about 20,000 inhabitants.

Her father, José Ramón Arteta was a musician and a school teacher. Convinced of the multiple benefits of music, he recast in Toulouse the “Coral Eresoinka”.

Eresoinka was a mixed instrumental, vocal and choreographic ensemble, formed in 1937 at the initiative of the Basque government in Bilbao.

Between 1937 and 1939, this group made up of 101 Basques spread the traditional Basque musical culture through international tours, interrupted in 1939 by World War II.

The choir, under the direction of the composer Gabriel Olaizola, composer of the famous Basque lullaby, included in its ranks Pepita Embil, future mother of Plácido Domingo, and Mariano González García, tenor of world fame, known as Luis Mariano.

Ainhoa Arteta remembers that she became interested in music when, at the age of five, she first heard a record by María Callas.

Her father was teaching her to form her voice; and soon, Ainhoa was able to sing in the “Coral Eresoinka” of which Don José Ramón was the director.

In 1976, when she was twelve years old, she enrolled at the San Sebastián Conservatory.

After reaching the age of majority, at 18, her parents sent her to Mantua, Italy, where she received style classes with the same teacher Luciano Pavarotti had.

Around 1987, and thanks to obtaining a scholarship from the Provincial Council of Guipúzcoa, Ainhoa Arteta was able to go to study acting at the famous “Actors Studio” in New York.

There she was, for three years, learning and perfecting the techniques of musical performance.

That was only the beginning of her training, because she has never stopped studying and training. One of her singing teachers was Ruth Falcon, the successful American operatic soprano.

Ainhoa Arteta debuted at the Palm Beach Florida Opera in 1990, playing Clorinda, in Rossini’s “Cinderella“. At that time, Montserrat Caballé was already a celebrity.

In 1993, she debuted at the Metropolitan Opera House in the United States and at the National Council Auditions in New York.

Her most famous roles were Violetta in “La Traviata“, by Verdi; that of the Countess Olga Sukarev, in the opera “Fedora“, by Umberto Giordano, where she sang with Plácido Domingo.

His goal was to launch the careers of the most promising voices on the international scene. The competition received nearly 1,000 applications, of which 40 were chosen to be evaluated by a committee of judges.

The jury met for two days with the aim of listening to the finalists. The final round was held in a gala concert, with a full orchestra conducted by the Spanish tenor himself.

For Ainhoa Arteta, 1993 was her year, since then she was crowned in Paris, with the prize of that international competition for opera voices, by Plácido Domingo.

The following year, on January 5, 1994, in the National Auditorium of Madrid, the best Spanish voices gathered to pay tribute to the lyrics, at the “Gala de Reyes“.

The event was held under the artistic direction of Plácido Domingo, with the participation of the Madrid Symphony Orchestra, conducted by Enrique García Asensio.

The royal family attended this concert, which offered as a surprise a duet sung by soprano Ainhoa Arteta and tenor Plácido Domingo; they performed a song from the zarzuela “El Gato Montés”, by the Valencian maestro Manuel Penella.

Since then, Ainhoa Arteta has developed an intense career in the international lyrical field, touring the great capitals of the world.

In mid-2003, some health problems forced her to have a nine-month medical leave.

In June 2004, she returned to the stage. And in 2005 she offered her first concert in Africa, at the headquarters of the Cervantes Institute in Algiers.

Performances immediately followed at prominent venues such as the “Verona Arena”, the “Munich Opera” and the “Berlin Opera”.

Finally, in June 2009 she debuted at the “Gran Teatro del Liceo” in Barcelona. Ainhoa Arteta made a magnificent performance of the opera “Turandot” by Giacomo Puccini.

Activities of Ainhoa Arteta in the following years

In April 1998, Ainhoa Arteta was named Honorary President of the “Fundación Maestro Segovia“, in Linares.

In October 1998, together with the pianist Alejandro Zabala, she participated in a recital offered by the White House on the occasion of the official visit of the President of Colombia to Washington.

Her first performance in London was in 1999, together with Placido Domingo, in a concert organized by the “Royal Opera Covent Garden“.

Ainhoa Arteta and Plácido Domingo have worked together regularly, in concerts and performances around the world

Also in 1999, she acted as Julieta in the opera “Romeo y Julieta”, in the Las Palmas de Gran Canaria opera season.

Ainhoa Arteta has confessed that she prefers opera to zarzuela. But that the zarzuela is a genre that well treated is a wonder.

Her first marriage was an ephemeral youth adventure. From this marriage she separated in 1994.

Later, when she performed at the New York Metropolitan, Ainhoa Arteta met the American baritone Dwayne Croft. They were married in 1998 at New York City Hall, in a ceremony officiated by Mayor Rudolph Giuliani.

They had a daughter in 2000: Sarah Croft Arteta. Finally they ended up separating in 2003. Surely, two brilliant professional careers that required frequent and long displacements made a life together impossible.

Ainhoa and Jesús were married in 2013 in Fuenterrabía.

A woman of great beauty, charisma and character, Ainhoa Arteta highlights a strong Basque identity, coupled with a deep love for Spain. She has been named Ambassador of the Spain Brand.

She is strongly committed to charities and non-profit organizations, especially in the fight against cancer and child poverty.

She actively collaborates by participating in charity concerts and recitals organized by the Spanish Association Against Cancer, Save the Children and Manos Unidas.

Repertoire of operas and zarzuela with Ainhoa Arteta

As soon as Ainhoa Arteta became known in the world of operatic music, the job offers became frequent and continuous.

This magnificent soprano played Micaela with great success in Bizet’s “Carmen”; Julieta, in Gounod’s “Romeo y Julieta”; to the Countess, in Mozart’s “The Marriage of Figaro”.

The list of performances of operas and zarzuelas that claimed her participation is very long: Bizet, Gounod, Leoncavallo, Mozart, Sorozabal, Vives, Verdi.

The recordings made by Ainhoa Arteta with the RTVE Orchestra and with other record labels are numerous and had enormous success.

Her albums with operas and zarzuelas had and continue to have great sales success and have managed to make known in Spain this exceptional soprano who, for too long, was better known abroad than in her own country.

Awards given to Ainhoa Arteta

Among the awards she has received in recent years are: