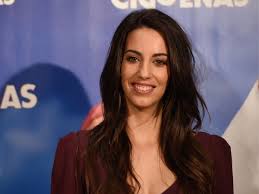 Biography of Almudena Cid, a former Spanish rhythmic gymnast, who participated with the Spanish national team in four Olympic Games.

She is the only rhythmic gymnast to have competed in four Olympic finals. Rhythmic gymnastics is an art that Almudena knew how to carry to perfection for 14 years.

Early years of this extraordinary Gymnast

Almudena Cid was born in Vitoria, on June 15, 1980. She began to practice rhythmic gymnastics at the age of 7, at the “Arantzabela Ikastola” school.

She had exceptional physical qualities and impressive flexibility.

Subsequently, she joined the “Club Arabatxo Gimnasia”, founded in 1986 with the aim of contributing to sports life in Vitoria.

Illustrious names such as Almudena Cid, Tania Lamarca, Ortzi Acosta, Victor Cano and Rafael Martínez have passed through its rooms.

In the 1993 Individual Spanish Championship, held in Valladolid, Almudena was 5th in the junior category.

At the age of 13, in May 1994, she played her first international competition, the “Gymnastics“, held in Cyprus. She won the gold ball, the bronze overall and the team bronze.

Months later, in November 1994, the Bulgarian coach Emilia Boneva appointed her to enter the national rhythmic gymnastics team in Spain.

The young gymnasts were concentrated in a chalet in the Canillejas neighborhood, in Madrid. And they trained an average of 8 hours a day in the Moscardó Gym. They were led by Mar Lozano, the singles coach.

That same chalet was also the gathering place for other brilliant individual gymnasts: the “Golden Girls”. This Spanish team was Olympic champion in Atlanta 1996.

In the 1995 Individual Spanish Championship, played in Alicante, Almudena Cid got her first title as champion of Spain. It was in the general contest of the honor category and in each of the devices.

International competitions of the Spanish Gymnast

Almudena Cid participated in the 1995 European Cup Final, in Telford (England). Also at the 1995 World Championship in Vienna.

She and Alba Caride qualified as individual gymnasts for the 1996 Atlanta Olympics.

In all of these tournaments, she won numerous individual and team medals.

The result of the effort of these Spanish gymnasts and the good quality of the training, was forging deserved international fame for Almudena Cid and her colleagues.

At the 1996 Atlanta Olympics, she managed to finish in the Olympic final, finishing in ninth position. At 16, she was the youngest in the competition.

Almudena Cid attended the 1997 International Tournament, in Prato (La Toscana). She got 3 bronzes and one silver.

In 1998, she competed in the Julieta Shismanova Tournament in Sofia (Bulgaria), in the European Championship in Porto. Shortly after, in the tournament held during the Seville World Championship.

The 1998 Portimão International Tournament allowed her to win gold in the general classification and in the three apparatuses.

In 1999, she played in the Budapest European Championship and in the Osaka World Championship (the third largest city in Japan)

Almudena Cid wins from the year 2000

Between 2000 and 2004, Almudena Cid’s sports activities were marked by numerous triumphs.

During the year 2000, she began to be trained by Dalia Kutkaite to replace Ana Bautista.

She was selected for the Sydney 2000 Olympic Games, in which she competed brilliantly despite being with a broken meniscus.

In late 2000, Esther Domínguez and Almudena Cid decided to go to their respective clubs and continue their training there.

In Vitoria, Almudena was reunited with her coach of the “Club Beti Aurrera”, Iratxe Aurrekoetxea, considered the architect of Almudena Cid’s “rebirth”.

Both ended up going to Barcelona, to work together at the High Performance Center of San Cugat.

At the Geneva European Championship, she presented her own element in her ball exercise: the Cid Tostado.

During the World Games in Akita (Japan), she achieved fourth place in the four apparatuses: rope, hoop, ball and ribbon. In October, she competed in the Madrid Rhythmic Gymnastics World Championship.

The triumphs in 2002 were numerous and spectacular. She got bronze at the Thiais Grand Prix in the ball exercise.

She proclaimed herself champion of Spain, in Leganés. She competed in the Rhythmic Gymnastics World Cup Final, held in Stuttgart. And she played in the European Championship in Granada.

The year 2003 was also one of intense sports activity. She played the individual tournament annexed to the European Risk Championship for teams.

She achieved the bronze medal in the ball final at the “Vitry Cup in Zaragoza”, which that year was a test of the World Cup.

She disputed in the World-wide Championship of Budapest.

In June 2004, at the Kiev European Championship, she was fifth in teams alongside Jennifer Colino.

In addition, she made her pass to the Athens 2004 Olympic Games. In these Games, Almudena managed to qualify for her third Olympic final, a fact that until then had not achieved any rhythmic gymnast.

In the final, played on August 29, she obtained eighth place and, therefore, the Olympic diploma.

The year 2005 continued just as triumphant. She was eighth in the ribbon final of the Corbeil-Essonnes tournament, a World Cup event.

In the Moscow European Championship, she was sixth in teams with Jennifer Colino and Esther Escolar.

The 2005 Mediterranean Games in Almería brought her a gold medal, several official international medals and 8 titles of champion of Spain in the general competition of the honor category.

In 2006, Almudena Cid obtained the bronze medal in the general of the Madeira International Tournament, a competition where she also obtained the “Award for Elegance“.

In the middle of the year, Almudena decided to take a break and participate in the television program “The challenge below zero“, in which she obtained the final victory.

On November 19, 2006 she participated in the first edition of the “Euskalgym”, which took place in Durango.

In 2007, she returned to the competition aiming to qualify for her fourth Olympic Games.

On November 10, 2007, she returned to participate in the “Euskalgym”, held again in Durango, with her hoop and club exercises.

In March 2008, she competed in the Kiev Deriugina Cup. She participated in the Portimão tournament, another test belonging to the World Cup, where she was also awarded the Dvillena Award for Elegance.

She won the bronze medal in the Hoop Final of the Corbeil-Essonnes tournament. She obtained ninth place in the final of the general competition of the European Championship in Turin.

The Spanish gymnast at the 2008 Beijing Olympics

In August it was the cover of the magazine FHM Spain. She was chosen to go to the 2008 Beijing Olympics in August, her fourth and last Olympics.

On August 22, she managed to qualify for her fourth Olympic final, thus becoming the only rhythmic gymnast to have done so.

On August 23, 2008, the day of the final, she ended her sports career by finishing eighth and therefore obtaining the Olympic diploma.

Her last exercise was that of a tape, whose music was an adaptation of the aria “Nessun dorma” by Giacomo Puccini, and her final gesture as a gymnast was to draw a heart on the tapestry and kiss it.

After retiring from competition tournaments, Almudena Cid has continued to be present in the world of gymnastics.

Since 2006, she has participated in the successive editions of the “Rhythmic Gymnastics Euskalgym” galas in Bilbao and in Vitoria, together with Ortzi Acosta, Rubén Orihuela, and Jorge Blass.

On July 23, 2016, she was one of the leading figures in Spanish rhythmic gymnastics invited to the 20th Anniversary gala of the Gold Medal in Atlanta ’96, held in Badajoz.

A year later, on November 18, 2017, she participated in the “Euskalgym” with a joint performance, as a tribute to the origins of rhythmic gymnastics, with a narrative background by Cid herself, and the themes “The Haunted Ocean 1 ”by Max Richter and the aria“ Nessun dorma”by Giacomo Puccini, performed live by pianist David Juárez.

Since 2007, she began to participate in the company StarDreams, made up of prominent famous athletes, and dedicated to advising managers and executives in improving job performance.

Almudena Cid has played several roles as an actress in television episodes, in theater and in short films.

In 2008, she participated as a teacher in “Circus, more difficult still”, a talent show type TV contest for the Spanish network Cuatro. The objective of the program was to find new talents in the circus world, facing twenty contestants – ten boys and ten girls – whose final prize was a year of scholarship in a circus school.

She also presented a section in the program “El hormiguero“, by Pablo Motos, in which she offered the weather report through rhythmic gymnastic movements.

Since 2016, she has regularly collaborated on the radio program “Anda ya”. Nowadays she dedicates a large part of her time to interpretive training; with Paloma del Río, discuss rhythmic gymnastics competitions through Teledeporte.

The international prestige, the sympathy that she enjoys in Spain and her natural elegance, have favored that various commercial firms have wanted to take advantage of the attractiveness of Almudena’s image to promote their products: Nike’s line of women’s sportswear, the winter collection of the clothing firm Love Store, the swimwear of the Carrefour supermarket chain.

In 2010, she starred in the national image campaign for Marca Extremadura, along with sportsman José Manuel Calderón and singer Huecco.

In November 2012, she launched her own line of bracelets, called “unadealmudena”.

Currently she dedicates a large part of her time to interpretive training and discusses rhythmic gymnastics competitions with Paloma del Río through Teledeporte.

In March 2011, she published “Super in 9 and a half weeks”, a book written with Juan Rallo, the personal trainer of the famous. They reveal the secrets that really work when it comes to getting fit and acquiring healthy lifestyle habits.

In October 2014, the first two volumes of “Olympia” were published, edited by Editorial Alfaguara.

They are a series of children’s stories written by herself, aimed mainly at girls between 9 and 12 years old and inspired by her sports career.

They have watercolor illustrations by Montse Martín (a former member of the Spanish rhythmic gymnastics team) and include tips for decorating the jerseys, on makeup and hairstyles. The stories are mainly aimed at girls between 9 and 12 years old.

The story of the life of the gymnasts in the national concentration during Almudena’s first active years, is present in the novel autobiography “Tears for a medal” (2008), written by Tania Lamarca and Cristina Gallo.

A review of her sports career appears in the book “Enredando en la memoria” (2015) by Paloma del Río.

Almudena Cid also appears as one of the illustrated gymnasts in the book “Pinceladas de rítmica” (2017), by Montse and Manel Martín.

About 20 years earlier, a Romanian gymnast. Nadia Comaneci had aroused similar admiration as an exceptional gymnast.

In the 20th century, there have been numerous Spanish women who began to make headlines in the sports world.