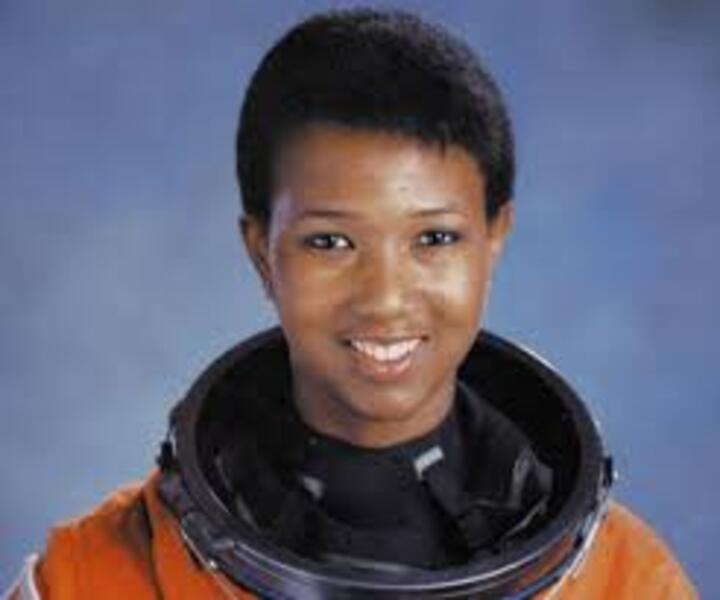 Biography of Mae Jemison, an extraordinary woman, of exceptional intelligence and courage, who has generously returned what nature and society gave her.

She was born in Alabama on October 17, 1956. She has become a NASA engineer, physicist and astronaut.

She was the first African-American woman who traveled to space.

Mae Jemison is the youngest daughter (the third) of Charles Jemison and Dorothy Green.

Her father, a carpenter by profession, was a maintenance supervisor in a charity.

Her mother worked primarily as an English and math teacher at Beethoven Elementary School in Chicago.

When Jemison was 3 years old, the family moved from Alabama to Chicago, to take advantage of the best education and employment opportunities in that city.

When she was older, Jemison said that as a child, there in Chicago, she was sure that she would travel to space as naturally as when she went to school.

Laughing, she added. “It is easier to be an astronaut than to stay in a wheat field waiting for ET to appear and take me with him“.

From a young age she knew that she wanted to be a scientist; before attending high school, she was already interested in the subject of space.

She graduated from high school at age 16. She studied at Stanford University with a scholarship, and obtained a degree in chemical engineering.

She later received a PhD in Medicine from Cornell University in 1981.

From 1983 to 1985 she joined the Peace Corps, working as a medical officer in the area, in West Africa, especially in Sierra Leone and Liberia.

In her childhood she learned to connect with science, observing with great interest nature.

On one occasion a finger was pricked, and the wound became infected. Her mother turned the finger infection into a whole research project about pus.

Her parents enthusiastically supported her interest in science.

Not so her teachers, that when Jemison said that when she grew up she wanted to be a scientist, they answered her and why not a nurse?

From a young age, Mae Jemison dreamed of being an astronaut

In the years of the Apollo project, all the boys were excited about the space and she was angry because there were no female astronauts. She was not convinced by the explanations they gave her.

Jemison said she was inspired by the thoughts of Martin Luther King.

She was sure that she would not have stayed in a dream, but that with boldness and courage she would have succeeded in making the movement in favor of human rights arouse citizens, empowering the entire human capital of the nation.

When she turned 11, she signed up for dance classes; to all kinds of dances: African dances, ballet, jazz, Japanese dances. Her goal was to become a professional dancer.

When she was 14, she appeared to play the role of Maria in “West Side Story“.

She did not succeed, although she sang reasonably well; but, thanks to her skills as a dancer, she was hired for the choir.

She had a real passion for theater and when she was in high school, she dreamed of going to New York and becoming a professional dancer or studying medicine.

Her mother told her: “being a doctor, you can always dance; but if you’re a dancer, you can’t be a doctor”.

Mae Jemison graduated from the Morgan Park High Shool in Chicago in 1973.

As soon as she graduated, she immediately enrolled at Stanford University.

This university is in California, far from her home in Chicago; and with 16 tender years, she needed her parents to place a lot of trust in her. And she did not disappoint them.

Mae Jemison knew that at that university it would be very difficult for a 16-year-old black woman to specialize in engineering.

Being black had always been a problem for people in the United States; more so, if it was a woman.

However, thanks to the arrogance of her youth, she moved on.

In fact, she says that some teachers pretended that she was not there, that they did NOT see her.

I was sure that if I asked any questions, the professor would think that was the dumbest question he had ever heard in his life.

Despite her optimism, she was hurt by the injustice of women and minorities being forced to have that attitude in some areas.

In 1977, at age 21, she obtained a Bachelor of Science degree in Stanford as a chemical engineer.

In addition, she met the requirements for a B.A. in African and African American studies.

She participated in the choreography of a musical production (“Out of the shadows”) and became involved in the black community, as Head of the African Student Union, in the University.

Mae Jemison obtained the title of doctor of medicine

In 1981, she obtained the title of Doctor of Medicine, at Cornell Medical College, New York.

She did internship in Los Angeles (California), and in 1982 she worked as a general practitioner.

When she studied medicine, she traveled to Cuba, Kenya and Thailand, to provide primary medical care there.

During her years at Cornell, she took modern dance lessons.

She later built a dance studio at her home and has choreographed and produced several modern jazz and African dance shows.

After completing her medical training, she joined the Peace Corps staff and served as a Peace Corps medical officer from 1983 to 1985.

She was responsible for the health of Peace Corps volunteers who served in Liberia and Sierra Leone.

This task included the supervision of the pharmacy, laboratory and medical personnel, as well as the provision of medical care, the writing of personal care manuals and the development and implementation of guidelines for health and safety issues.

She also worked at the Center for Disease Control, helping with the research of several vaccines.

There was a fact that demonstrated the intelligence and self-confidence that this girl under 30 years old had. One of the volunteers became seriously ill and her doctor diagnosed her with malaria.

The health of the volunteer progressively worsened; Mae Jemison was sure it was meningitis, with life-threatening complications that could not be treated in Sierra Leone.

She requested a German Air Force hospital plane based in Germany for a military medical evacuation; The cost was US $ 80,000.

The Embassy asked if Jemison had the authority to give that order: she told them she didn’t need anyone’s permission to make a medical decision.

When the plane arrived in Germany with Jemison and the volunteer on board, she had been awake with the patient for 56 hours. The patient survived.

Mae Jemison decided to be an astronaut

After Sally Ride Mae Jemison was the first American to fly into space on a space shuttle, on June 18, 1983, the astronaut program was open to women at NASA and Jemison was soon running for a flight.

She had seen the movie “Star Trek” and wanted to emulate African-American actress Michelle Nichols, who played Lieutenant Uhura in that movie.

In 1987, she received the news of her acceptance in the astronaut program. She was one of fifteen candidates chosen from approximately 2,000 applicants.

In 1992, she was the first African-American woman to travel to space. She traveled to the edge of Endeavor on the STS-47 mission.

During the eight days she was in space, she carried out experiments on weightlessness and motion sickness (disorders caused by movement in the body) in herself and in 6 other crew members.

In total she spent 190 hours in space, in a joint work between Japan and the United States.

Jemison recalls that “I was working on the intermediate deck, where there are not many windows, and when we passed over Chicago, the commander called me into the cockpit. It was a very exciting time, because since I was a child I had assumed that I would go to space. “

Before her, Sally Ride had already traveled to space in 1983 and Shannon Lucid in 1985. Mae Jemison enjoyed feeling like a Trekkie; she was 31 years old, to dream.

She had taken with her a poster of the American Dance Theater, small art objects from African countries and a photo of Coleman, the first African-American woman who flew a plane.

After serving at NASA from 1987 to 1993, Jemison founded her own company, the “Jemison Group, Inc.”, which developed ALAFITA satellite-based telecommunications system.

The purpose of this system was to improve medical care in developing countries.

In addition, she created the “Foundation for Excellence, Dorothy Jemison“; she named it that in honor of her mother.

“My parents were the best scientists I met,” said Mae Jemison, “because they always asked questions“.

One of the projects of the Jemison Foundation is “The Earth We Share” (TEWS), an international science camp, where students ages 12 to 16 work to solve current global problems, such as “How many people can sustain the Earth? “.

Camps have been held at Dartmouth College, at the Colorado School of Mines, Choate Rosemary Hall and elsewhere in the United States.

TEWS was extended to high school students, in day programs, in South Africa and Tunisia.

From 1995 to 2002, she was a full professor at Cornell University and a professor of Environmental Studies at Darmouth University (in Hanover, northeast of the USA).

Shortly after Mae Jemison, an aviator who was also born in 1956, Eileen Collins, participated in space missions, taking advantage of the path she had already opened for women: Mae Jemison.

Among her current projects there are several others, focused on improving health in Africa and advancing technologies in developing countries.

There have been few distinctions she has received for her merits as an astronaut, doctor, engineer and teacher.

Their scientific and educational activities are numerous and varied, as well as their conferences, publications of press articles and specialized books.

She participates in what has been called “100 Year Star ship” that spreads the idea that we exist to realize the capacity of human travel beyond our solar system, in the next 100 years.

This institution is dedicated without reservation to identify and support the radical advances in knowledge and technology necessary to achieve interstellar flight.

At the same time, they want to be pioneers, and transform innovative applications that improve the quality of life for everyone on Earth.

For all of the above, Mae Jemison deserves to have been dedicated to this short biography among “salient women.”