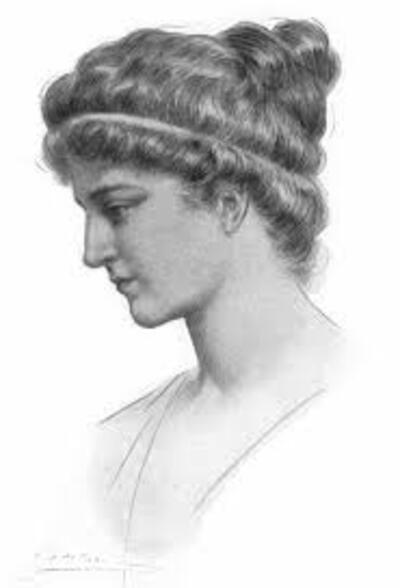 Biography of  Hypatia born in Alexandria, capital of the Roman diocese of Egypt. No data is known about her mother.

Her father, Theon of Alexandria, philosopher and mathematician was dedicated to research and teaching at the Alexandria Museum, founded by Ptolemy.

This Museum had more than one hundred professors who lived there; many more, periodically attended as guests to impart their knowledge.

According to records of the time, Theon wanted his daughter to be a perfect human being. For which, he worried that Hypatia would receive a very complete scientific education.

Hypatia lived from childhood in an academic and cultured environment. Thanks to the teachings of her father, she learned mathematics and astronomy.

In addition, her father and everything around her, transmitted the passion to work in the search for the unknown.

Hypatia traveled to other countries to improve her training

Although Hypatia traveled to Athens and Italy to receive courses in philosophy, she was educated in the Museum itself and was part of it until her death.

Endowed with great beauty, Hypatia also devoted herself to an exhaustive care of her body. She practiced a daily physical routine that allowed her to maintain a healthy body, as well as an active mind.

Hypatia gave up the marriage

Despite her remarkable physical and intellectual qualities, Hypatia refused to marry. She was determined to surrender completely to science.

For twenty years she dedicated herself to teaching all this knowledge in the Museum of Alexandria. She even managed the Museum. This happened around 400 A.D.

Her unique character as a woman devoted to thought and teaching earned her general appreciation.

Hypatia was intensely dedicated to teaching

Hypatia formed a select school of aristocrats who, over time, held high positions in Alexandria.

This extraordinary woman wrote books on geometry, algebra and astronomy. She also improved the design of primitive astrolabs.

In addition to mapping celestial bodies, making a planisphere, Hypatia was interested in mechanics.

Unfortunately, none of her works have been preserved. However, they are known thanks to their disciples, such as Sinesio de Cirene or Hesiquio de Alejandría.

This remarkable woman also dedicated herself to the teaching of philosophy, focusing on the works of Plato and Aristotle.

The house of Hypatia became a teaching place where students from all over the known world came, attracted by their fame.

The Imperial Prefect of Alexandria, Orestes, was advised by Hipatia in political affairs.

The rhetoric Damascio wrote that Hypatia was popular as an advisor to the highest magistrates of Alexandria.

Her student Hesiquio sentence that was worshiped and revered in Alexandria: “Dressed in the cloak of the philosophers, making its way through the city, publicly explained the writings of Plato, or Aristotle, or any philosopher, to all who wanted listen (…) The magistrates used to consult her first for their administration of city affairs … “; she added that she had received “many civic distinctions.“

Patriarch Cyril felt threatened, and several factions connected with the Church believed that she should be eliminated.

Hipatia of Alexandria was cowardly murdered

In the year 415 a mob of Christians attacked Hypatia in the middle of the street, took her out of her carriage and brutally murdered her, tore her body apart and burned it outside Alexandria.

The assassination of Hypatia took place within the framework of Christian hostility towards the declining paganism, when this remarkable woman was barely 60 years old.

Hypatia’s death raised a stir. The murder of this brilliant woman was an oprobious crime for Christians.

Humanity had to wait more than 1,000 years until another exceptional astronomer appeared: Carolina Herschel.

Author’s note: I recommend reading an excellent article published in Chaos and Science, on November 30, 2009 by Antonio Mampaso, Doctor of Astrophysics from the University of La Laguna and researcher at the Institute of Astrophysics of the Canary Islands. He was the astronomical advisor of the film “Agora”, by Chilean director Alejandro Amenabar. Click here to see the article.