Biography of Valentina Tereshkova the first woman in the world who traveled to space. She was also the first civilian to do so.

This first Soviet cosmonaut performed her immortal feat on June 16, 1963, at the age of 26, aboard the Vostok-6 ship.

Valentina was born in the village of Yaroslavl, in central Russia, on March 6, 1937.

Her father Vladimir Tereshkov was a tractor driver; her mother worked in a textile plant.

Valentina’s father died in action, in 1939, during the Winter War that developed in Finland during World War II.

In 1945, at the age of eight, Valentina began going to the village school.

But, at the end of 8 years of primary school, she had to go to work in a tire factory, as she had to help her mother and her two younger brothers get ahead.

She was 16 years old and had a great desire to learn; she managed to follow correspondence courses, in order to study engineering as soon as possible.

Very soon she became interested in skydiving and requested her registration at the local Aeroclub.

At that time she was already studying Engineering and working in a textile industry company.

The scientific thesis for her engineering career deserved Outstanding qualification and was entitled: “Braking engines for orbital airplanes“.

In 1961, she was appointed secretary of the “Young Communist Union” (Konsomol) of the Soviet Union.

Valentina Tereshkova wanted to be a cosmonaut

Her engineering studies and skydiving experience made it possible for her to be accepted in the Women’s Section of Cosmonaut in 1962.

In full aerospace competition between the USA and the USSR, on April 12, 1961, Yuri Gagarin was the first human being to fly in an orbit around the Earth.

It was a great deal in favor of the Russians in the space race.

Enthused by a triumph that had humiliated the Americans, Sergey Korolyov, responsible for the USSR launches, had the idea of posing a new challenge in this hard-fought space race: that it was a Russian woman who made the next flight through space.

More than 400 candidates appeared for the body of female cosmonauts.

The requirements included that they were skydivers under 30 years of age, 1.70 meters tall and less than 70 kg in weight.

ValentinaTereshkova was considered a particularly worthy candidate, partly because of her proletarian origin, and because her father, tank sergeant Vladimir Tereshkov, was a war hero.

The training included the thermal chamber, where she was to remain with a flight suit at a temperature of 70º C and humidity of 30 percent.

Also, Valentina Tereshkova and her companions passed the weightless training and prepared for landing on land and sea, with parachutes.

The group spent several months in intensive training, which ended in November 1962.

Valentina Tereshkova traveled to space in 1963

Afterwards, a program was developed that prepared two women to go to space, on two flights, on consecutive days, in March or April 1963.

Due to the paranoia that had been unleashed in those times, the space program was carried out completely in secret.

Cosmonaut Tereshkova’s mother did not know her daughter’s situation until a few days before the launch.

She was very calm, believing that her Valentina was attending day-to-day training camp for elite military.

In March 1963, it was decided that the Vostok-5 spacecraft would go to space on June 14, with a male cosmonaut, Valery Bykovsky.

The Vostok-6 ship would carry out the mission two days later, on June 16, 1963, with a cosmonaut on board; Valentina Tereshkova.

Nikita Khrushchev approved these two missions and confirmed the appointment of Valentina, who was 26 years old.

Once all the checks were done, she was locked inside the ship.

After a two-hour count, the Vostok-6 was launched smoothly, and Tereshkova became the first woman to reach space and orbit around Earth.

Her call sign on this flight was Chaika (English: Seagull).

She became famous throughout the world with the affectionate name of “Seagull“.

Later, they wanted to remember her by giving that name to an asteroid: 1671-Chaika.

On the day of her space flight, Valentina told her family members that she was going to skydive competitions.

Her family learned about the flight when they heard the great news, on the radio.

During much of the flights she experienced nausea and physical discomfort; In addition to a strong pain in the neck, because the helmet was very heavy.

She orbited the Earth 48 times and spent almost three days in space.

With a single flight, she recorded more time than all American astronauts together, until that date.

She kept a detailed record of the flight and took photographs of the horizon, to be used in the identification of aerosol layers of the atmosphere.

But, due to a system failure, she was not allowed to take manual control of the ship for landing, as planned.

The Vostok-5, which led Valery Bykovsky to a similar orbit for five days, landed three hours after Tereshkova.

At one point, the two ships had approached each other and were five kilometers away in space.

Both had communicated by radio with each other and with Nikita Khrushchev.

We had to wait a long time, 19 years (in 1982), for another woman, Svetlana Savitskaya, to fly into space and perform a spacewalk.

Elena Kondakova was working at the International Space Station for 169 days.

None of the other four women in Tereshkova’s group flew; and in October 1969, the USSR dissolved the group of women cosmonauts.

The United States did not send a woman into space until 1983 (it was Sally Ride).

After her mission, Valentina was asked what the Soviet Union could do for her, to thank her for the service she had provided to her country.

She asked the government to look for the place where her father had died in action.

The government fulfilled this desire and built a monument in Finland, which Valentina Tereshkova has visited several times.

Nikita Khrushchev presided over the ceremony, together with all members of the Government and with the leaders of the space program.

A year later, Valentina gave birth to her daughter Elena, who is now a medical doctor and who was the first person born of two cosmonauts who had gone into space.

After the space mission, she studied at the Air Force Academy and graduated as a space engineer in 1969.

In 1977, she received a doctorate in engineering.

After the collapse of the Soviet Union, Valentina has continued politically active and continues to be considered a great hero in post-Soviet Russia.

In 1997 she retired from the air force and the body of cosmonauts. At the opening ceremony of the 2014 Winter Olympics, she was the bearer of the Olympic flag.

Tereshkova has taken advantage of her fame to favor citizens with disabilities; and she provides personal assistance in multiple orphanages.

Likewise, she has been an indefatigable fighter of the Russian women’s movement, advocating for Soviet women to have the same opportunities as men.

She is passionate about the peace processes on the planet.

In 2013, Tereshkova, 76 years old, surprised everyone when she publicly expressed her desire to travel to Mars, even if the trip was only one way.

Throughout the rest of her life, the USSR has granted her numerous honors for such a clamorous success, in times of great rivalry with the United States of America.

Her great contribution to the development of manned space flights and her generous social activities has been recognized.

She has had an outstanding contribution to the development and strengthening of international scientific, cultural and social ties.

The lunar crater Tereshkova bears this name in memory of this woman of extraordinary intelligence and courage. 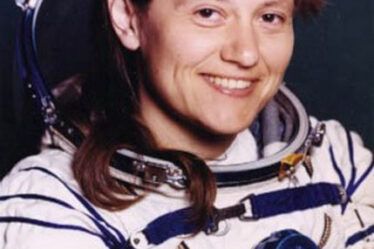